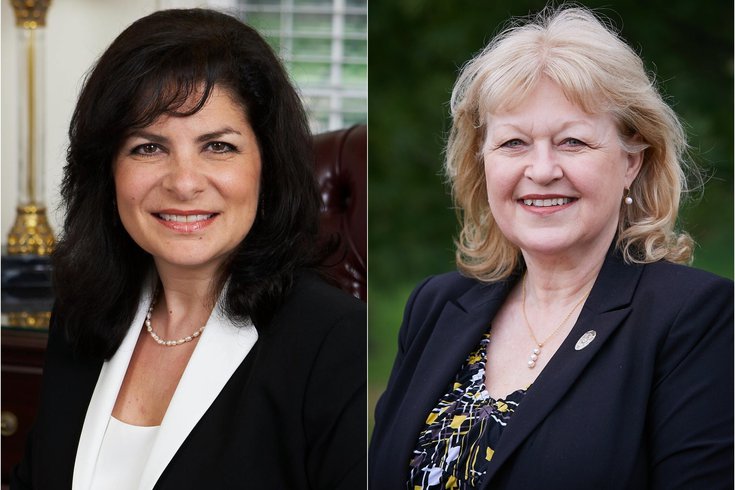 The number of Democratic voters in New Jersey's 8th Legislative District has doubled over the last decade, but the vast majority of residents remain unaffiliated.

Republican candidates lead Wednesday evening in the New Jersey Legislature's District 8 elections for Senate and Assembly, but no winners have been declared in the races.

The race for the New Jersey Legislature's District 8 Senate seat is one of the most competitive legislative elections in the state this year, pitting Republican-turned-Democrat Sen. Dawn Marie Addiego against Republican Assemblywoman Jean Stanfield.

While Republicans are unlikely to make many meaningful inroads into the Democrat's majority in both houses of the New Jersey Legislature this election cycle, but that margin could be narrowed in the state Senate beginning with District 8.

Addiego is running as a Democrat for the first time since switching parties two years ago. She represented the district in the Assembly from 2008 to 2010, during which time she was assistant Republican Whip and assistant GOP Leader.

The legislator was appointed to fill the district's vacant state Senate seat in 2010, and Addiego was elected to her first full-term in 2011, winning an uncontested race. Addiego easily won reelection in 2013 before squeaking out a 4-point victory in the 2017 election.

But as the GOP moved further to the right during the Trump presidency, Addiego switched parties and became a Democrat in 2019, saying that her constituents "did not elect me to be content in the role of loyal opposition" to the Murphy administration.

The shifting political atmosphere of the district may have played a role in Addiego's decision, too. Along with winning by just four points in her final race as a Republican, the number of Democratic voters in Addiego's district has doubled during the last decade.

Addiego's gamble comes with political risk, too. The 8th Legislative District, which encompasses about 20 towns across Atlantic, Burlington and Camden counties, has historically been under Republican control. The GOP hasn't lost a term in the district since 1973, as Democrats struggled to even garner 40% of the vote in the pre-Trump era.

Stanfield called the senator's party switch "reprehensible." Stanfield, who was first elected to the Assembly in 2019, said she would have retired had Addiego not defected.

Stanfield said Addiego is not living up to her legislative commitments, claiming constituents have complained about the senator's office being unhelpful and unresponsive during the COVID-19 pandemic. A native of Southampton Township, Stanfield previously was the Burlington County sheriff from 2002 to 2019.

An attorney by trade, Addiego began her career in public service on the Evesham Township Council and Planning Board from 1993 to 2000. She then served as Burlington County freeholder from 2000 to 2008.

Addiego and Stanfield's policy differences largely focus on property taxes and how best to make the district more affordable.

The incumbent senator has pointed towards the reimplementation of the millionaire's tax last year and the subsequent tax rebate for less wealthy families, the Senior Freeze and the expanded Homestead Benefit as important sources of relief for the middle class. Stanfield has slammed some of those efforts as political stunts.

Running on the Republican ticket are former Hammonton Township Councilman Mike Torrissi and acting Manchester Township Administrator Brandon Umba. Marlton attorney Mark Natale, who ran for Assembly and lost in 2019, and Lenape Regional High School Board of Education member Allison Eckel are the Democrats running in the district.

The Republicans have made property taxes their top priority during the campaign as part of an effort to make the district more affordable for current residents and to attract new businesses to New Jersey. Torrissi and Umba also argue that local schools have lost out on state funding under Addiego's leadership.

The Democrats agree that property taxes are a major issue in the district. Natale and Eckel believe that they can be lowered if New Jersey's school funding formula is tweaked to provide more aid to the district, thus making it more affordable for residents.

The District 8 race is on pace to be the second-most expensive legislative election in the state this fall, behind the District 2 contest. Almost $3 million has been spent so far in by candidates and outside groups, including a $1.2 million contribution by the super PAC American Democratic Majority, which has ties to South Jersey Democratic power broker George Norcross.

Democratic voters outpace Republicans by about 9,000 in the district, but the vast majority of residents are unaffiliated. Therefore, whichever side is able to turn out more independent voters might be the difference in this closely-contested race.

Disclosure: George Norcross is the father of PhillyVoice Founder and Chairwoman Lexie Norcross.