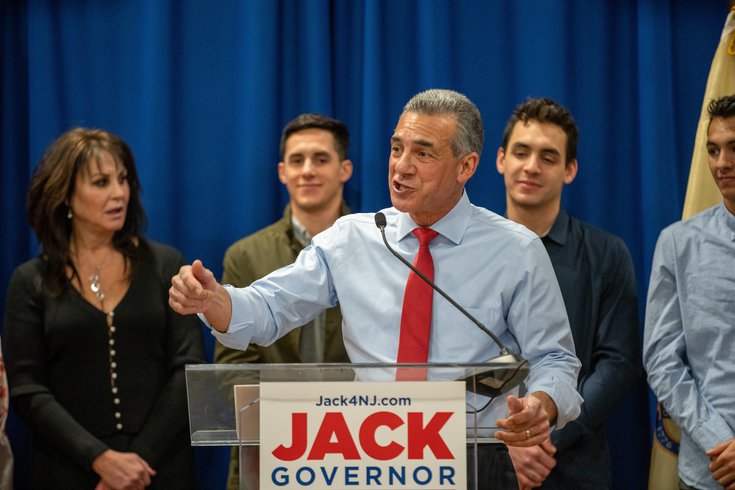 Jack Ciattarelli will move on to November's general election, where he will face Democratic incumbent Gov. Phil Murphy. Above is a file photo of Ciattarelli speaking at his gubernatorial campaign launch in January 2020.

By early Wednesday morning, with more than 89% of precincts reporting, Ciattarelli, a former New Jersey assemblyman, received nearly 50% of the votes cast – the Associated Press has declared him the winner Tuesday night about two hours after the polls closed. Philip Rizzo is in second with 26% of votes, Hirsh Singh IA in third with 21.4% and Brian Levine only received about 3%.

All results are unofficial until certified by New Jersey election officials.

Gov. Chris Christie was New Jersey's most recent Republican governor, serving two terms before leaving office in 2018, and since 1947, the state has elected five GOP governors. In that same time, there have been seven Democratic governors, and no Democrat has been reelected to consecutive terms since former Gov. Brendan Byrne in 1977.

Most most political pundits predicted that Ciattarelli would emerge with the GOP nomination Tuesday. All 21 county GOP organizations, as well as many current and former state and federal legislators, backed Ciattarelli in the primary.

But a Rutgers-Eagleton poll published Tuesday found that 52% of residents said they would vote for Murphy versus 26% for Ciattarelli in the general election. The Republican's biggest hurdle before November is name recognition – 52% of people surveyed do not know who Ciattarelli is.

Ciattarelli entered the primary as the only candidate with experience holding state-level office, and this is his second campaign for governor.

A native and resident of Somerset County in Central Jersey, Ciattarelli got his start in politics on Raritan Borough Council from 1990 to 1995. He then rose to countywide office in 2007 when he was elected as a Somerset County freeholder.

Ciattarelli won election to the New Jersey General Assembly and served the 16th District from 2011 to 2018. His district covered parts of Hunterdon, Mercer, Middlesex and Somerset counties.

Ciattarelli also previously worked as an an accountant and later was the owner and publisher of Galen Publishing, a medical publishing company.

He says he can make New Jersey a more affordable place to live and retire, and if elected will reinvigorate the economy in the wake of the COVID-19 pandemic. Ciattarelli's campaign promises include lowering property taxes; cutting the corporate tax rate in half; reforming the state pension system; making health insurance more affordable; upgrading the state's infrastructure; and rebalancing the New Jersey's public school funding.

He supports returning Atlantic City to local control and has been critical of Murphy's handling of the COVID-19 pandemic, saying the governor's policies have cost lives in nursing homes and devastated the economy.

While in the state legislature, Ciattarelli was openly critical of Christie, including twice voting to override the former governor's vetos on gun control bills. But Ciattarelli also endorsed Christie over Donald Trump during his 2016 run for president.

New Jersey's 2021 primary election on Tuesday operated largely with in-person voting after most residents voted by mail in 2020 due to the COVID-19 pandemic. Ballot drop boxes and vote-by-mail options were also made available to voters who chose not to cast their ballots in-person on Election Day.