The winner of the election on June 8 will face Democratic incumbent Gov. Phil Murphy in November 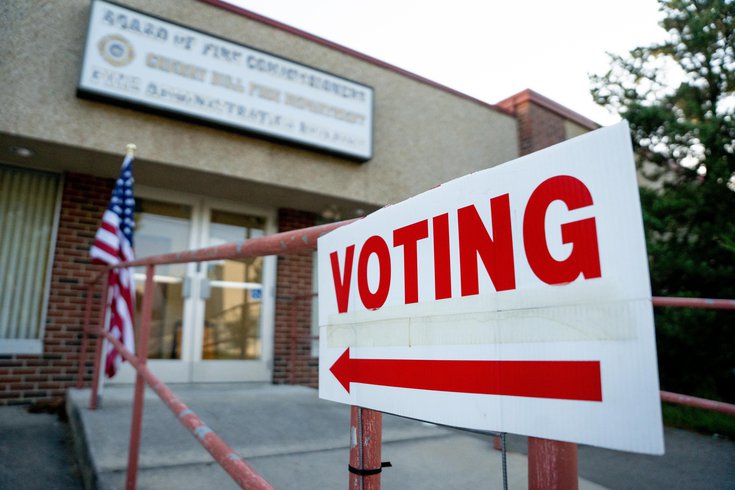 New Jersey's Republican primary election for governor is June 8. There are four candidates on the ballot: Jack Ciattarelli, Brian Levine, Phil Rizzo and Hirsh Singh. The winner will run against Gov. Phil Murphy in November. He is running unopposed in the Democratic primary. The file image above shows a sign outside a polling place in Cherry Hill during the 2020 primary.

Former President Donald Trump is being made a campaign issue by some in the Republican field of candidates for governor as New Jersey voters get ready to head to the polls on June 8 for the state's primary election.

Despite the fact that Trump, a part-time resident of the state, lost New Jersey by a combined 30 points in the last two presidential elections, the upcoming Republican primary is shaping up to be a referendum on his time in the White House and his influence on the Republican Party.

Four candidates are vying to become the state's next governor, with two of those candidates emerging as frontrunners in the race. They are Jack Ciattarelli, Brian Levine, Phil Rizzo and Hirsh Singh, with Ciattarelli and Singh leading the pack.

Ciattarelli and Singh are the only two candidates who raised enough money to qualify for two debates that had been scheduled. In the first debate on Tuesday, Ciattarelli touted his experience in politics, while Singh portrayed himself as an outsider, pledged allegiance to Trump and promoted the false claim that the former president had won the November election.

The second debate on Wednesday never happened. It was canceled after Singh refused to get tested for COVID-19 in advance.

The winner of the June 8 GOP gubernatorial primary will advance to face Democratic incumbent Gov. Phil Murphy, who is running unopposed in his party's primary election and is seeking a second term in Trenton.

The election will operate primarily in-person after most residents voted by mail in 2020 due to the COVID-19 pandemic. Polls will be open from 6 a.m.-8 p.m. Information on polling locations, ballot drop boxes and voting by mail in each county can be found on the New Jersey Division of Elections website.

Below are profiles on each of the four candidates running for the Republican nomination for governor in New Jersey.

Jack Ciattarelli enters the primary as the only candidate with experience holding state-level office.

A native and resident of Somerset County in Central Jersey, Ciattarelli got his start in politics serving on the Raritan Borough Council from 1990-1995. From 1991-1995, Ciattarelli served as council president. He then rose to countywide office in 2007 when he was elected as a Somerset County freeholder.

Ciattarelli won election to the New Jersey General Assembly and served the 16th District in the state legislature from 2011-2018. His district covered parts of Hunterdon, Mercer, Middlesex and Somerset counties.

Ciattarelli served on the Financial Institutions and Insurance and the Regulated Professions committees during his time in the Assembly. He was assistant minority whip in the Assembly from 2014-2018.

The longtime Republican legislator ran in the 2017 New Jersey GOP gubernatorial primary, finishing second to former Lt. Gov. Kim Guadagno with 31% of the vote. Ciattarelli focused on issues such as school funding reform, tax reform and employee benefits reform in his first campaign for governor, according to Ballotpedia.

Now running for governor a second time, Ciattarelli is touting that his experience of starting two businesses in the state will help make New Jersey a more affordable place in which to live and retire. His business experience includes working as a CPA and as the owner and publisher of Galen Publishing, a medical publishing company.

Ciattarelli has centered much of his campaign message on economic issues, like reinvigorating the economy in the wake of the COVID-19 pandemic, and appealling to swing voters.

"What we need to do is appeal to the majority party in the state, which are the 2.4 million unaffiliated independent voters, who tend to lean right, by the way, and the soft Democrats who are just as upset as we are about high property taxes," Ciattarelli told New Jersey Monthly in March.

Ciattarelli has promised to do the following, if elected governor.

Two other important issues to Ciattarelli's campaign are immigration and election reform: He wants to end New Jersey's status as a sanctuary state for undocumented immigrants, and while advocating for more early, in-person voting, he also wants voters to be required to show IDs before casting ballots.

Ciattarelli supports returning Atlantic City to local control. The longtime politician has been critical of Murphy's handling of the COVID-19 pandemic, saying that the governor's policies have cost lives in nursing homes and devastated the economy. And Ciattarelli accuses Murphy of failing to address the state's fiscal issues.

When it comes to Trump, Ciattarelli's record is mixed on the matter. In 2015, he called Trump "a charlatan who is out of step with American values" and said that the businessman was not fit to be president.

During his time in the state legislature, Ciattarelli openly critical of Christie during the latter's tenure as governor, according to Politico, including twice voting to override the former governor's vetos on gun control bills. But Ciattarelli also endorsed Christie during his 2016 run for president.

Brian Levine is another candidate in this year's Republican field who calls Somerset County home.

Levine got his start in politics as a Franklin Township councilman from 1998-2003 and mayor of the town from 2004-2014. He was then elected freeholder in Somerset County in 2014. Levine served in his countywide position until 2020 before losing his re-election bid for a third term, according to MyCentralJersey.com.

He previously attempted to run for governor in 2009, but failed to get enough signatures to get on the ballot, NJ.com reported. Four years later, he ran for state senate in the 17th District, but lost to Democrat Bob Smith in the general election.

With a professional background in accounting, Levine has focused his gubernatorial campaign in 2021 around using his financial experience to fix the state's fiscal issues which he blames on past and current administrations.

"I decided to run for Governor because I believe I can bring positive change to New Jersey" Levine said in a statement. "I have the experience, the education, and the drive to solve some of New Jersey's biggest issues."

"I will bring fiscal sanity to the State by budgeting responsibly and implementing policies that stem from my proven fiscally conservative credentials," he continued. "I will create a business-friendly atmosphere, financial incentives, implement programs designed to fix the spotty pandemic relief for businesses, and help citizens that are hurting."

Among the policies that the fiscal conservative Levine has proposed, if elected governor, are the following.

Levine has calls himself the "Trenton outsider" of the race, as well as pledging to run a grassroots campaign and be "The People's Governor" if elected, the New Jersey Globe reported.

The accountant has been critical of Murphy for being "unsympathetic" and "oblivious to important ancillary issues." Levine has also called upon the GOP to stop arguing over the role of Trump in the Republican Party and instead focus on cutting taxes, according to the Associated Press.

Phil Rizzo has no previous political experience, but that isn't stopping the Morris County native from running for governor this year.

A graduate of Villanova University, Rizzo's professional background is in real estate development and construction, having built homes in New Jersey and Pennsylvania.

But it is Rizzo's Christian faith that the candidate is mostly highlighting when making his case to voters on the campaign trail.

Since 2012, Rizzo has started two churches in Hudson County. He has served as pastor in both. Rizzo also co-founded a Christian school in 2013 where he served as an administrator.

If elected governor, Rizzo has said that he will "stand up for the rights guaranteed under our Constitution," like religious freedom.

He's also made education a top priority of his campaign, having pledged to improve the state's school funding formula and increase the number of public charter schools operating in New Jersey. He has called for New Jersey's schools to fully reopen amid the COVID-19 pandemic, saying that "our kids are falling behind during a pivotal time in their education."

Similar to Ciattarelli and Levine, Rizzo said that he wants to cut spending and taxes, as well as balance the state budget. Rizzo has also called for "protecting elections" by purging voter rolls and creating voter ID cards.

Rizzo has criticized Murphy for his handling of the COVID-19 pandemic, saying that "prolonged closures and government mandates are bringing a host of unintended consequences for kids, families, and our economy." And he believes authority of New Jersey's executive branch has been too broad during the public health crisis, saying, "The current governor has become far too powerful, often bullying New Jerseyans to do what he thinks best."

Rizzo supports Trump and in April he was photographed with the former president in Mar-a-Lago, according to New Jersey Globe. The GOP candidate also is a member of Trump National Golf Club in Bedminster.

Hirsh Singh, who has become a regular in GOP primary elections during the last several years, is the only gubernatorial candidate with ties to South Jersey.

He is a native of Atlantic City, graduate of Egg Harbor Township High School and resident of Linwood, Atlantic County.

Singh's professional background is in engineering science, biomedical tissue engineering and material science. His first professional experience was as a geographic information systems technician at the Burlington County Office of Emergency Management. He has also worked for his family's engineering and security firm that specializes in missile defense, satellite navigation and aviation security and safety.

Singh has never held an elected office, but he has run several campaigns as a Republican in New Jersey, according to Ballotpedia.

Singh ran in the 2017 New Jersey GOP gubernatorial primary, finishing third, with about 9% of the vote behind the Republican nominee, former Lt. Gov. Kim Guadagno, and Ciattarelli.

Singh sued Murphy last year over the governor's executive order that implemented a mostly vote-by-mail election in 2020 due to the COVID-19 pandemic. He also sought a recount of U.S. Sen. Cory Booker's re-election race, but the case was thrown out by the New Jersey Supreme Court, Superior Court judges and the U.S. Supreme Court.

Singh is campaigning on many of the same issues he has focused on in previous races:

Like Rizzo, Singh supports Trump, and says on his campaign website that the former president, God and guns are what keep people free. Singh has received the endorsement of former Trump adviser and campaign manager Brad Parscale.

"The principles President Trump fought for during his four years in office are the ideals that I will defend every day as the next Governor of New Jersey," Singh said in a statement.

Singh has criticized Ciattarelli during the primary for not fully embracing the former president, calling the former state legislator "a member of the corrupt RINO political establishment."

Singh has also criticized Murphy for his handling of the state's economy and the COVID-19 pandemic, saying that the current governor has overseen "years of unmitigated failure."

"New Jersey needs a new leader who empowers the people, not the government, to unleash the full economic potential of our state after years of neglect and mismanagement at the hands of Phil Murphy and career politicians," Singh said.