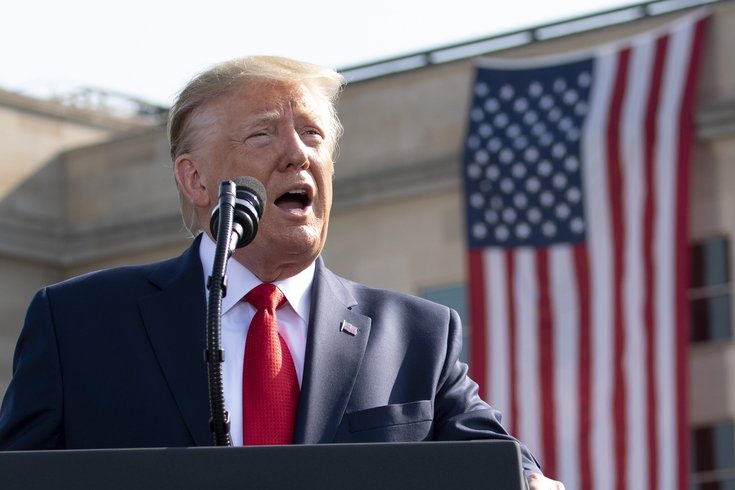 Not long after President Donald Trump's defense team finished their arguments in the Senate impeachment trial, Trump spoke at his fourth campaign rally of 2020 in Wildwood.

Trump's rally at the Wildwoods Convention Center had a large turnout, though the exact count has yet to be determined. Trump supporters filled the 7,400 seats at the convention center with people standing on the floor in front of the podium.

Trump, in his speech to supporters, claimed "tens of thousands" of supporters were present in Wildwood, as he does at all of his speaking appearances, which often do draw large audiences. He noted that the "fake news" wouldn't report the actual number. "They're fake. They're not honest. They never mention it," he said.

Brad Parscale, campaign manager for the Trump campaign, tweeted several statistics about the attendance at the Jersey Shore event, including that more than 158,000 people had RSVP'd to attend online, but none of those numbers were independently verifiable.

By all accounts Trump's speech seemed on-point with a typical Trump rally, even if shorter and more on-script than many. But like campaign rallies for all candidates of all parties, often the interesting stuff happens adjacent to the actual event, like CBS3 getting their van towed outside of the rally.

This is the CBS news truck getting towed from the Trump Rally. When you watch this clip what do you notice? #TrumpRallyNJ pic.twitter.com/Qo4ups4jN2

Bolero Bar, a restaurant on the Wildwood Boardwalk, created a Trump rally drink list, including the MAGArita, Subpoena Colada and The Sanders — a drink that you buy that's then give to someone who doesn't have a drink.

From the Bolero Bar in Wildwood, NJ a few blocks away from Trump Rally. pic.twitter.com/jq02YkhxRt

The rally took place just miles away from Atlantic City — the Jersey Shore town where Trump made and lost millions. The mogul's casinos filed for bankruptcy five times between the 1980s and 2000s. Earlier this month, the city's Mayor Marty Small announced he wanted to demolish the Trump Plaza Hotel and Casino, referring to the building as an "eyesore." Trump did not mention Atlantic City or his former casinos in his speech.

Why is Trump holding a rally in Wildwood, New Jersey, when all of his casinos are only a few miles away?

I’m kidding. They all went bankrupt years ago.

Trump spoke for about an hour before handing over his support to Democrat-turned-Republican U.S. Rep. Jeff Van Drew.

"A few weeks ago Jeff was one of the few brave and principal Democrat lawmakers — in all fairness we've been after him for a long time — who stood up to the house democrats and to the outrageous abuse of power you see going on right now," he said in his speech.

Former New Jersey Gov. Chris Christie and White House counselor Kellyanne Conway, who grew up in Waterford Township, Camden County, both spoke at the event. When Conway stepped to the podium, she said, "Mr. President, I think South Jersey is Trump country."

"Thank you Mr. President for all you've done" -- New Jersey native Kellyanne Conway gets on stage for some Dear Leader moments pic.twitter.com/URm3NBPJWp

Despite the successes of the turnout, a large number of New Jersey residents still do not approve of the president. More than half of New Jersey residents do not approve of the president. Data collected by Morning Consult shows that Trump held a 56% disapproval rating in December, a trend that stayed consistent throughout 2019.