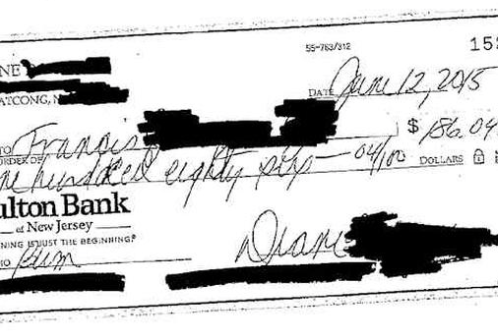 A New Jersey man has filed a lawsuit against his ex-wife over a series of apparent jabs she directed at him on the memo line of multiple alimony checks, including insults such as "loser," "bum" and "adult child support."

In her defense, Diane Wagner says she consistently keeps up with the $744 monthly payments and is entitled to write whatever she pleases on the memo line since it is intended for her own reference.

She is currently undergoing treatment for cancer and learned of her ex-husband's complaint when a friend pointed out that an image of her alimony check had been posted on the page of the law firm representing him.

Francis Wagner is seeking unspecified compensation. The lawsuit also claims that a $5,000 deposit was erroneously placed in a joint account with Diane Wagner, who allegedly withdrew the money without acknowledging any wrongdoing.