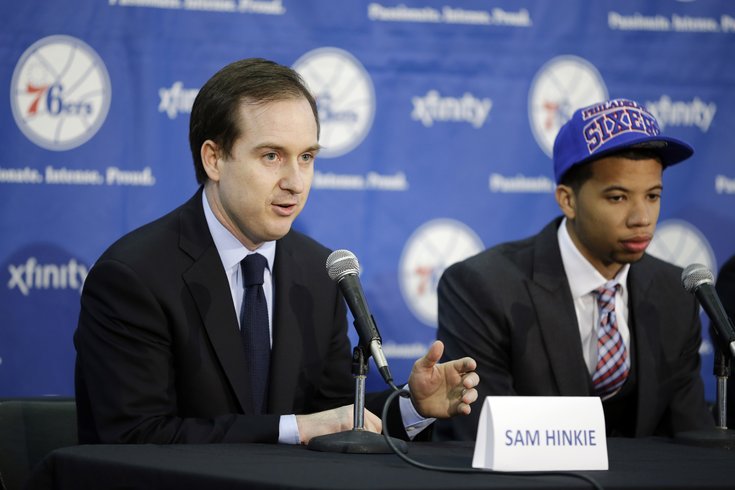 In Sam Hinkie’s world, the unknown is better than the reigning NBA Rookie of the Year.

The little boy with a Michael Carter-Williams jersey will never understand why his favorite player is not a Sixer anymore. How are we supposed to explain to a child what “optionality” is?

Last week, in his latest venture into a murky future, GM Sam Hinkie traded the NBA rookie of the year because he wanted more options. In Hinkie’s twisted world, the correct term is “optionality” – the process of turning the known into the unknown, a tangible reality into a vague new promise. Or something like that.

In case you missed my previous remarks in this space about Sam Hinkie, here is a synopsis: He is the biggest fraud I have ever encountered during my 40 years in sports media.

Sam Hinkie never saw Carter-Williams as a 23-year-old point guard still learning his craft. Carter-Williams is a real person, with all of his flaws and eccentricities. Hinkie prefers blank spaces on future draft boards because they never throw the ball out of bounds or miss an open three-point shot. Analytics is theoretical. Real life is not.

In case you missed my previous remarks in this space about Sam Hinkie, here is a synopsis: He is the biggest fraud I have ever encountered during my 40 years in sports media. He is a charlatan, a snake-oil salesman. He is the Pied Piper of the young and the naïve, people who are not savvy enough to spot the con.

To these cultists, nothing can penetrate their admiration for a man who has accomplished nothing, a mysterious figure with a network of enablers who are hypnotized by his elusiveness. Through it all, none of these people – my most recent Internet poll had his number of admirers at 52 percent – has any interest in simple logic.

The real story of the Carter-Williams trade was that it involved a player Hinkie himself had drafted. Didn’t the GM’s extensive analytics research reveal that Carter-Williams was not much of an outside shooter? There was no computer analysis that revealed a tendency to turn the ball over? These flaws were not evident 21 months ago?

When Hinkie traded his own hand-picked point guard at the deadline last week, he revealed two things he would prefer to hide for as long as possible. The first is that his ability to evaluate talent is vastly overrated. And the second is that he has no actual plan to rebuild the team.

How can I be so sure? Well, let’s start with the basic ingredient in every rebuilding plan, the players. Does Hinkie have any specific college stars in mind right now? No, doesn’t know where he will pick in the lottery this year, and even less of a notion of whom, or even what year, all of these future picks will be.

Plus, all rebuilding plans need a timetable. Hinkie used more than 300 words to say nothing when asked for a date when the team will be a contender again.

The follow-up question was: How will we know?

And so it goes, one insultingly vague answer after another, spouted in a mumbo-jumbo style by a man asking for blind faith in a city of cynics. Of course, in Hinkie’s analytics world, there are no doubters. A carpetbagger who emerges from his cocoon a few times a year, he even has the audacity now to imply an intimacy with the fans.

"Our fans understand that what we are trying to do is build something great, “ he said.

Not really. The father of the little boy with a Michael Carter-Williams jersey called my WIP radio show last Friday. He doesn’t understand at all what Sam Hinkie is trying to do.

I told him to buy the kid a jersey representing a Philadelphia team not run by Sam Hinkie. After all, the fans have “optionality,” too.

When Cole Hamels finally leaves Philadelphia, he will be one of the least appreciated champions in the history of our city.

Not only was Hamels the most valuable player in a 2008 World Series that represents our only pro-sports championship in 32 years, but he has also conducted himself over the past decade with a respect for the fans rarely seen in star players. Unfortunately, he has not received the same level of esteem in return.

On Saturday, Hamels explained his unusual philosophy when he was clarifying remarks he had made in January about wanting to finish his career with a winner. These are words every athlete should follow, but few do: “For what it’s worth, I’ve always tried to be very honest with people in general. I don’t cue-card it.”

In a city where more and more sports figures are either avoiding all questions or rolling out one stupid cliché after another – what Hamels referred to as “cue-carding” – the veteran pitcher still feels an obligation to answer a fair question by expressing his true feelings. Imagine that.

Of course, there’s a lot more to Hamels and his decade in Philadelphia than his candor. He has also been the best starting pitcher on the Phillies during the most successful era in their history, and he did more than anyone else to deliver that championship.

On his own team, Chase Utley, Jimmy Rollins, Ryan Howard and even Charlie Manuel are more revered. For that matter, the Flyers champions of four decades ago get more love than Hamels, as does Chuck Bednarik, who won the championship for the Eagles 55 years ago. Why?

The best guess is that it’s not what Hamels is saying but the way he’s saying it. Hamels has always had a slick West-Coast vibe that belies his toughness on the field and his commitment off it. He just doesn’t connect with a blue-collar city like Philadelphia.

But we owe Cole Hamels far more appreciation than we’ve given him, and now is the time to show it. He is an honest man who won us a championship. What more can we ask than that?

Not that he would ever tell us, but wouldn’t you love to know what Chip Kelly was thinking as he watched his favorite quarterback, Marcus Mariota, dazzle everyone at the NFL combine last week?

The NFL Network actually captured the Eagles coach watching Mariota run a 4.52 40-yard dash, binoculars glued to the player he recruited at Oregon and the one athlete Kelly has gushed over in his two years here. It’s a safe bet the coach is obsessing even more now over how to make Mariota the next Eagles franchise quarterback.

But how? Mariota did Kelly no favors by outperforming his chief draft rival at quarterback, Jameis Winston of Florida State, in every athletic test. If Tampa Bay wasn’t questioning its rumored preference for Winston before the combine, it is now. The Buccaneers have the top pick, and Kelly is powerless if they fall in love with Mariota.

Chances are, however, they will talk themselves out of him because Mariota is untested outside of Kelly’s unique offense. Assuming Mariota is not the top pick, it would be a shock – an absolute shock – if Kelly did not move mountains to try to get him. Once again, I advise everyone to tune out the naysayers. Yes, the move is unconventional; so is Kelly.

Mariota himself was asked last week how he would feel about rejoining Kelly in Philadelphia, and – after acknowledging that he had no say in the matter – called it a “fun opportunity.” Wouldn’t you love to know what he was really thinking?

Some things are just meant to be. Chip Kelly coaching Marcus Mariota in the NFL is inevitable. As I write this, I am wearing a Marcus Mariota Eagles jersey, believed to be the first of its kind. That’s how sure I am that he’ll end up here. Get yours now, while supplies last.

• Ben Davis will replace Jamie Moyer as a TV analyst on Phillies games this year. I have worked with Davis on my WIP radio show for three years now, and there is no more honest and sincere voice in Philadelphia sports. I’m happy to say the Phillies have dramatically upgraded at least one position this season.

• One of the biggest stories of the year in Philadelphia sports has slipped past just about everybody. For the first time in more than four years – encompassing 175 consecutive games – the Flyers failed to sell out two contests at the Wells Fargo Center last week. Fans will no longer tolerate mediocrity, even if it’s the Flyers.

• I know this strategy goes against all conventional NHL thinking, but based on the way he handled the shootout on Saturday, I would assign Flyers goalie Rob Zepp as my shootout goaltender, even in games he hasn’t played. He’s really good at shootouts. The other goalies are not. It’s that simple.

• The hole just keeps getting deeper for Roger Goodell. The NFL commissioner is still investigating Deflategate in New England, amid reports that a league employee sold some of the evidence. Meanwhile, the man who said he’s available for questions “almost every day” hasn’t been available once in the past month.

• The Eagles’ boycott of the fans, now in its eighth week, got even more absurd last week when former Birds’ coach Andy Reid answered questions at the NFL combine about the power shift in the team’s front office. Unfortunately, Reid was just as boring as he had been during his 14 years here.