Air quality near the junkyard fire in North Philly has returned to normal, city officials say 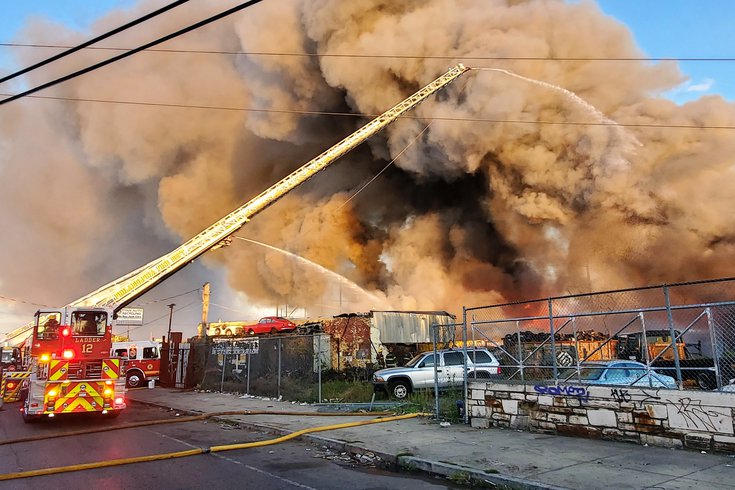 Air quality tests showed the fire caused a rise in particulate matter – microscopic solids or liquids that can be inhaled and cause health issues – but levels had returned to normal by 9 p.m., city health officials said Wednesday afternoon. The tests did not identify any toxic compounds at the site of the fire.

The fire caused a rise in the amount of particulate matter, or PM 2.5, while the fire was still burning. PM 2.5 levels have been normal since 9pm. Additionally, no toxic compounds were identified at the site of the fire at levels that would pose a threat to human health. (2/2)

The fire ignited around 5:30 p.m. at North Third Street and Sedgley Avenue. The dark smoke that billowed into the sky could be seen for miles. About 120 members of the Philadelphia Fire Department, including firefighters, medics and support personnel, responded to the scene.

Residents were urged to stay indoors, close windows and recirculate air with fans to protect themselves from poor air quality. The city also advised them to limit excessive activities, like running. Motorists were encouraged to avoid the area.

The fire was placed under control at 7:15 p.m. Tuesday, but the fire department remained on the scene Wednesday to douse hot spots. This requires utilizing heavy equipment to move scrap and burned cars out of the way, according to Kathy Matheson, Communications Director for the Philadelphia Fire Department.

The cause of the fire is under investigation. No injuries have been reported.

"Members of our Fire Marshal's Office are investigating the cause of the fire in cooperation with the ATF, which is normal procedure for a multi-alarm fire," Matheson said in an email.