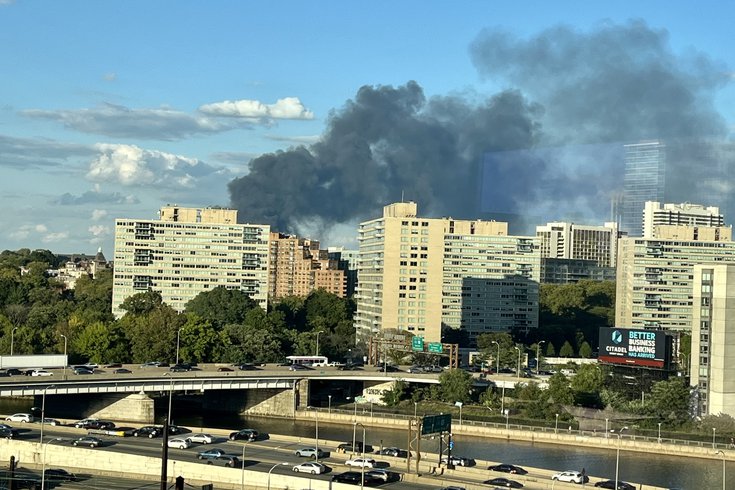 A junkyard fire burned Tuesday afternoon at Third Street and Sedgley Avenue. The above photo shows smoke rising above buildings, as seen from University City.

Dark smoke could be seen for miles rising above the city late Tuesday afternoon as a junkyard fire raged in North Philadelphia.

The fire was originally identified by the department as a two-alarm fire, before being upgraded to three-alarm, meaning 120 Philadelphia Fire Department members were sent to the scene, including firefighters, medics and support personnel.

This fire is now at 3 alarms, meaning about 120 PFD members are at the scene -- firefighters, medics, chiefs and support personnel.

Philadelphia Fire Department was at the scene since 5:25 p.m., according to their Twitter.

PFD has been on scene near 3rd & Sedgley in North Philly since about 5:25 p.m. pic.twitter.com/GoomgcbRoj

People are advised to avoid the area. SEPTA reported that some Regional Rail trains traveling north have lost power due to the fire. Some SEPTA lines, including Trenton, have been suspended due to the fire.

Apologies, it is due to a large fire in north Philly that is close to the tracks. Stay tuned for details. ^NV

The Health Department is investigating a possible air quality event near the fire.