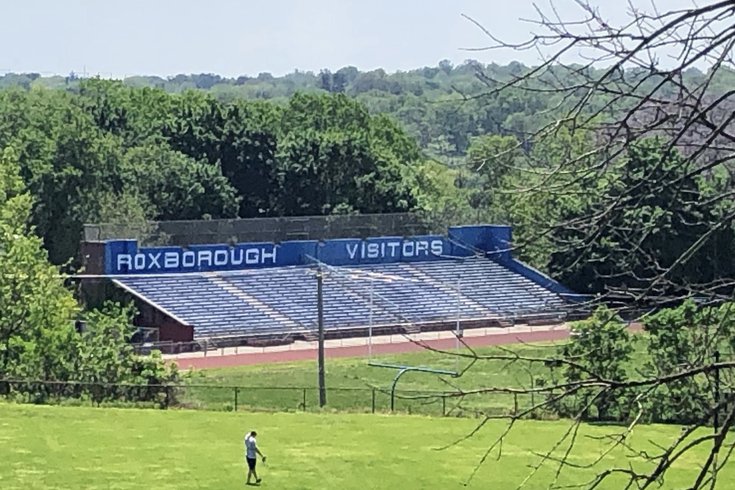 Four players on Roxborough High School's football team were shot around 4:30 p.m. Tuesday near Pechin Street and Fairway Terrace, which is behind the school near its football stadium where the team practices. The file photo above show the bleachers at Roxborough's stadium, as seen from Gorgas Park.

A 14-year-old football player was killed and four others were injured in a shooting after football practice at Roxborough High School on Tuesday afternoon, police said. The students are members of one of three football teams that had been scrimmaging at Roxborough's field.

The shooting happened around 4:30 p.m. near Fairway Terrace and Pechin Street, which is behind Roxborough High School and close to the school's football stadium, where the team practices. The players were walking off the field, north on Pechin Street, after the scrimmage when a light-green Ford Explorer drove by and the people inside fired multiple shots, investigators said.

The Explorer fled westbound on Fairway Terrace after the shooting. Police said there were at least two shooters involved, but did not have any other information about the suspects.

Authorities did not immediately release the identity the boy who was killed.

Three of the players were taken to Einstein Medical Center and a fourth was taken to Temple University Hospital, police said. The fifth player was treated at the scene for a graze wound.

Authorities did not say what led to the gunfire. Police surrounded the school into Tuesday evening and circled spent bullet casings in chalk along Pechin Street near Fairway Terrace. There are multiple cameras in the area that police said they will use to review surveillance footage.

"Schools have always been centers of community and will continue to be, so it's absolutely unacceptable," Philadelphia School District Superintendent Tony B. Watlington said Tuesday evening.

"This is just a horrifying situation at every level. Schools are supposed to be the answer," Philadelphia District Attorney Larry Krasner said. "We keep kids in schools so they don't get involved in shootings ... The remedy has to be a safe place. People have to be able to go there and do positive, constructive things, like play football."

Officials set up an area for parents to reunite with students at 6401 Ridge Ave.

For the latest information about the fatal shooting of the Roxborough High School football player after Tuesday's practice, read our article published Wednesday.