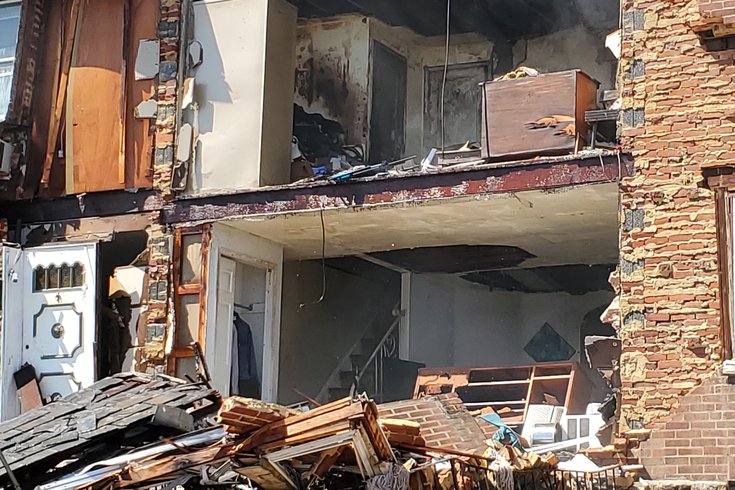 A home on the 6300 block of Algard Street in Northeast Philadelphia exploded and caught fire on April 6, 2021. One man was injured and taken to Jefferson Hospital. The cause of the explosion remains under investigation.

A 61-year-old man was injured Tuesday when an explosion at a Northeast Philadelphia home blew out the front facade and the building caught fire, police said.

The incident happened around 1:20 p.m. on the 6300 block of Algard Street, located in the Wissinoming section of the city. Authorities found the front of the building destroyed and a fire raging on the second floor.

UPDATE: More than 60 PFD members responded this afternoon to the Wissinoming neighborhood, where they found a home with a collapsed facade and heavy fire on the second floor. pic.twitter.com/zUZW8Siaj9

Dozens of PFD members are responding on the 6300 block of Algard Street. Commissioner @ThielAdam will provide a briefing to media at the scene. pic.twitter.com/o6Cp2uGJhW

The victim was transported to Thomas Jefferson University Hospital in Center City with unknown injuries. His condition was not immediately known.

A second man was treated for smoke inhalation at the scene.

More than 60 members of the Philadelphia Fire Department responded to the home, where they were able to place the fire under control just after 2 p.m. Philadelphia Gas Works personnel also were at the scene, police said.

Several adjacent homes were evacuated, but it's not clear what kind of damage the explosion and fire may have caused to other properties.

The Fire Marshal's Office is handling the investigation into the cause of the explosion.