Northern lights could be visible from Philly tonight, but weather will likely obscure view 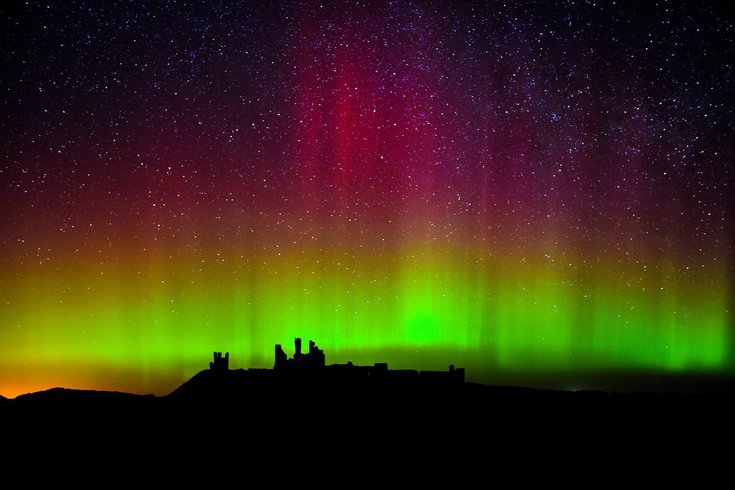 The northern lights, also known as aurora borealis, could be visible from the Philadelphia area on Thursday night and Friday morning, but it's likely that cloudy weather will get in the way.

Two massive explosions on the surface of the sun could allow some residents in the Philadelphia region to catch a glimpse of the northern lights tonight through early tomorrow morning.

Otherwise known as aurora borealis, the colorful ribbons of light would be easiest to see between 9 p.m. on Thursday and 2 a.m. on Friday, CBS3 reported. However, it will be possible to view the light show at any time that it's sufficiently dark.

The lights – which are most often green, but can also be blue, violet, or red – could be visible overhead in northern parts of the region. But even the more southerly parts of metro Philly might be able to see them on the horizon, according to the University of Alaska Fairbanks' aurora forecast.

But tonight's weather could make the lights hard to see.

Meteorologists are expecting showers with periods of heavy rainfall and possible thunderstorms to roll in this evening by 7 or 8 p.m. The initial storms will most likely have passed by late evening, but there's a chance for an additional round of showers and severe thunderstorms through the overnight hours.

Those in the suburbs and rural areas will have an easier time seeing the lights, as the brightness of urban areas makes auroras and other heavenly lights harder to spot.

The lights are caused by electrically charged particles from the sun traveling to Earth via solar winds. Once the particles reach Earth's atmosphere, they interact with oxygen and nitrogen particles which causes a release of energy in the form of light. This is called a "geomagnetic storm."

The lights tend to be most visible in the arctic and antarctic regions because the electrons are deflected by the earth's magnetic field and are generally forced toward the poles, where the magnetic field is weakest, said Marian Mateling, a researcher in the University of Wisconsin's Department of Atmospheric and Oceanic Sciences.

Scientists from the National Oceanic and Atmospheric Administration identified two coronal mass ejections on Monday, which is why the aurora is expected to be visible so far south tonight. A CME occurs when an area of the sun’s surface with a powerful magnetic field, called a sunspot, explodes and releases a burst of radiation and solar material.

This means there will be an especially high concentration of charged electrons in the atmosphere tonight.

X1 (R3) strong radio blackout occurred 30/1:37pm EDT from RGN 2975. Initial indications are this flare was associated with a new CME and forecasters are examining data to verify any such CME. See full story at https://t.co/00tjRHJEWf pic.twitter.com/xlRQDw6NEc