The flames broke out on Wednesday around 5 a.m. after appearing to start in a nearby shed 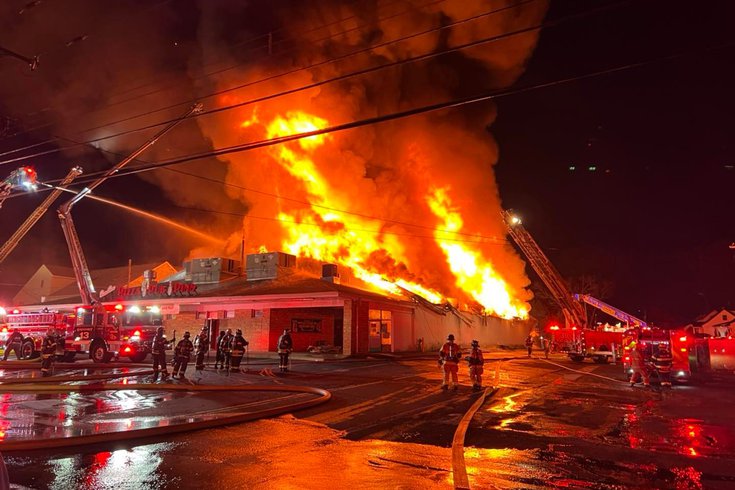 The fire broke out at Levittown Lanes around 5 a.m. and reached three alarms by 6:20 a.m. when the building's roof had already collapsed, 6ABC reported. Only the front perimeter of the bowling alley seemed to still be standing.

The blaze appeared to start in a shed before moving to the bowling alley, according to NBC10. A nearby pickup truck had also caught on fire.

BREAKING UPDATE: Levittown Lanes bowling alley fire has spread from one end to the other on the large building along New Falls Road ⁦@FOX29philly⁩ pic.twitter.com/trA5w7hwrS

Volunteers from Surrounding areas are operating at a multi alarm fire at Levittown Lanes Bowling Center. Please avoid this area.

Thick smoke and flames could be seen coming out of the building as far away as parts of I-95 in Bucks County and Northeast Philadelphia.

You can see thick black smoke from as far back as the Academy road exit in Philly.

Fire officials said that the blaze was threatening neighboring properties and homes. Firefighters were still on the scene Wednesday morning working to put out the flames.

A loss for the Levittown community, firefighters are working to extinguish the 3-alarm fire here at Levittown Lanes. @6abc

Thick smoke is billowing out of the building, officials say the fire is threatening neighboring properties. pic.twitter.com/PJ2i3Fke1G

The fire forced several road closures in the surrounding area. Pennsbury School District had to reroute school buses and issued an alert regarding transportation delays due to the flames.

There were no reports of injuries.