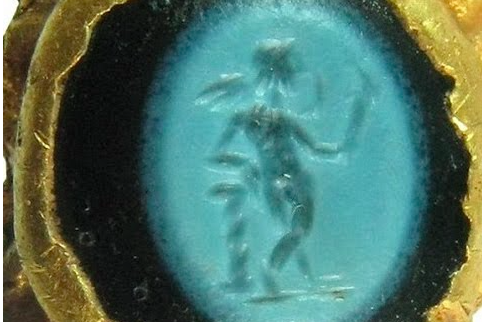 Mythological god Cupid depicted in engraving on carved gold ring. Researchers say the artifact, discovered in the U.K. in 2013, dates back 1,700 years to the fourth century A.D.

After two years of analysis, a carved gold ring found by an amateur metal detectorist in the United Kingdom has been confirmed to bear an engraved depiction of Cupid on an onyx stone made of nicolo, LiveScience reports. Researchers have dated the ring back 1,700 years, around the fourth century A.D., during a time when the Roman Empire ruled over England.

In the engraving, a disrobed Cupid is shown leaning on a small spiral column with a torch in his hands and short wings sprouting from his shoulders.

Found in 2013, the ring was taken to Portable Antiquities Scheme, a London-based archeological project created to encourage treasure hunters to report the discovery of artifacts.

The ring reaches back to some of the earliest artistic depictions of Cupid at least 2,500 years ago. In the second century A.D., the Roman philosopher Apuleius published an account of Cupid in the ancient novel "The Golden Ass."

The young, trouble-making god – son of Venus (goddess of love) and Mars (god of war) – becomes infatuated with the human mortal Psyche. Cupid, who likes to cavort around with no clothes, impregnates Psyche, infuriating Venus and prompting her to plan a series of seemingly insurmountable challenges for Psyche to complete. With the help of an assortment of and other creatures, Psyche manages to survive, attain immortality and get the best of a jealous Venus.

Researchers say the ring, found in the village of Tangley, is one of several in the historical record that depict Cupid, offering further evidence that the conniving god was an important motif in Roman culture. After it is examined and documented by the Hampshire Museums Service, the ring will go on display at the Andover Museum in the United Kingdom.

Learn more about the discovery in the video below.