A compilation of data spanning back to 1984 has been released by the city of Philadelphia. The data covers several key indicators such as poverty and crime rates, education funding and job growth. The report highlights some of the implied accomplishments of Mayor Michael Nutter's administration, such as job growth: 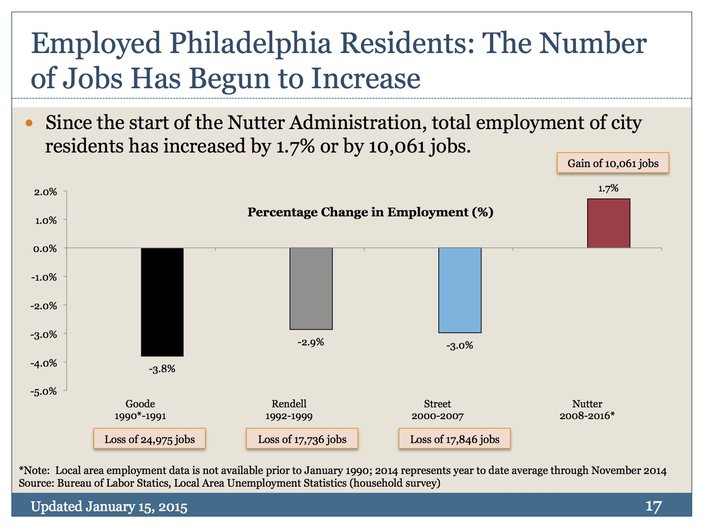 A press release accompanying the report says the data is meant to allow Philadelphians to analyze how the city has progressed during the Nutter administration, but notes there is room for improvement:

Even with significant advances in many areas, the report also shows that Philadelphia still faces many challenges, namely the highest poverty rate of the top ten biggest cities in America and lack of additional funding for schools.  However, the report shows that over time with consistent effort and a vision for the future, Philadelphia can make significant progress.

The poverty rate in Philadelphia, as shown in the report, has dropped in recent years but still remains consistently and significantly higher than the national and state averages: 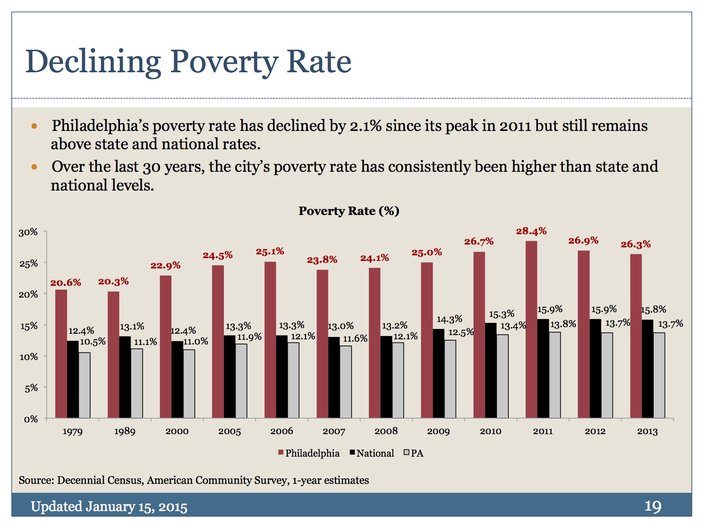 Mike Dunn of CBS Philadelphia points out that the report may be a defense measure against anticipated attacks from mayoral candidates in the upcoming election, and quotes Nutter suggesting as much with some carefully constructed language:

"I’m not expecting this is going to be a negative campaign or that people (will be) trying to slant things in a particular direction. But there are facts, and people should know them. When people talk about them, they should talk about them on a basis of fact, and not theory or whisper-down-the-lane.”

While the report details a large pool of factors in assessing Nutter's tenure, Patrick Kerksta of Philadelphia Magazine explains how some context is needed in digesting the data:

The population gain of 53,000 tallied in the Nutter years beats the hell out of the decline his predecessors posted, but it's no better than what New York, or Los Angeles or Washington D.C. have done. Other cities have matched or surpassed Philly's declining homicide totals as well. And most cities, remember, are not starting off in the same enormous hole that Nutter inherited in 2008.