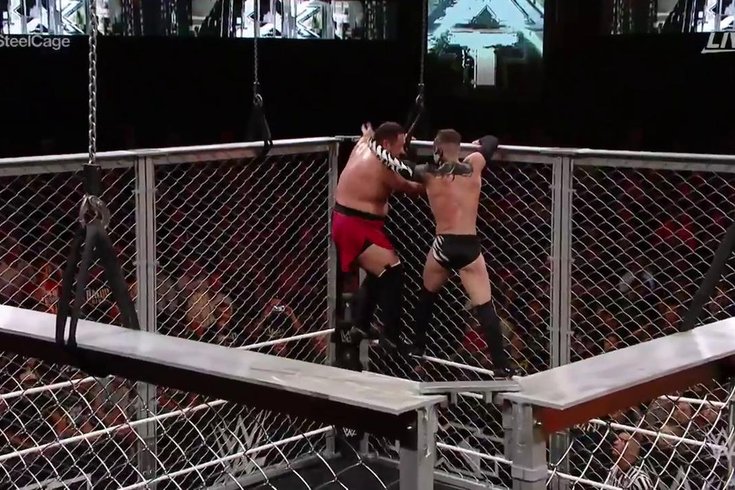 NXT went back home to Full Sail University in Orlando, Fla. on Wednesday night for their latest TakeOver special simply subtitled, “The End.” Many people thought “The End” meant that was possibly the last NXT TakeOver special for the developmental brand due to the upcoming brand split of WWE’s main roster in July.

That had very little chance of happening, if any, because NXT’s going on tour this summer with dates already announced. Also, if WWE were to infiltrate NXT into their main roster, it defeats the purpose of having a developmental brand. NXT never had a chance of going away.

No, “The End” symbolized the final chapter of the feud between the current NXT Champion, Samoa Joe, and the former champion, Finn Bálor. The two would meet in the main event in a steel cage to finally settle the score. It’d be the first steel cage match in NXT history. Would these two give us a match to remember? Stay tuned.

Here’s what went down on Wednesday night at Full Sail University:

This was Almas’ debut in NXT after making a name for himself overseas in New Japan Pro Wrestling as well as CMLL in Mexico. Dillinger is an NXT MVP for making other wrestlers look good, so it made sense for this to be Almas’ first match with the company.

Almas impressed in his debut match, especially with his flurry of offense towards the end of the match. In what could be described as one of those combination finishers in video games, Almas hit a double knee followed by a bulldog followed by running double knees into the corner on Dillinger. That’s all she wrote. Good debut for Almas.

This was a rematch from the last NXT TakeOver in Dallas before WrestleMania when American Alpha won the NXT Tag Team Championship in quite an emotional moment.

There’s never a shortage of action when these two teams get together. All four of these guys move crisply in the ring and rarely seem off. In the beginning of the match there was an all-out brawl that was different for these two teams’ styles, but it was still fun to see. Things quickly settled down and we had another great tag team match to witness between these teams.

The action was fast and furious at the end of the match and it looked like the champions would retain their championships as they set up for their finisher, but Dawson threw Gable out of the ring and he and Dash hit the Shatter Machine to regain their NXT Tag Team Championships.

Your winners and NEW NXT Tag Team Champions: The Revival

I didn’t think there was a chance for American Alpha to lose the titles this soon.

After the match, two unknown guys attacked Jordan and Gable in the ring. On the entrance ramp, out came none other than the legendary Road Warriors manager, Paul Ellering.

We’d come to find out these two unknown guys are Sunny Dhinsa and Gzim Selmani, and their tag team name is The Authors of Pain. Dhinsa is a former Canadian national heavyweight champion and Selmani is a former Bellator fighter.

It is The Revival’s second tag team title reign.

There’s nobody in NXT right now – maybe with the exception of Finn Bálor – that has a better entrance than Nakamura. Proof:

Aries’s debut in NXT has sort of worn off by now and putting him in a match with Nakamura was a no-win situation for him – literally. Nakamura’s not going to lose a match any time soon (well, he shouldn’t) so almost all of us knew what the outcome of this match would be.

But that didn’t make it less entertaining at all.

Aries and Nakamura gave us a great show with some bumps I’m sure we wish we didn’t see for the sheer factor of each man’s health. When Aries hit Nakamura with the Death Valley Driver on the ring apron, I think that hurt my entire body. Nakamura would hit Aries with the Kinshasa off the middle rope and then hit him with a running Kinshasa and that’s all she wrote.

Asuka won the NXT Women’s Championship at the last NXT TakeOver in Dallas, so I didn’t think there was a chance she’d lose the title so soon.

Then again, I didn’t think there was a chance American Alpha would lose the NXT Tag Team Championships so soon, either, after winning them on the same day.

Asuka’s on a completely different level, though. She might be the best wrestler on the NXT and main rosters right now. And she proved she can work against any woman after defeating Bayley in April and then defeating Nia Jax on Wednesday night. It’s Jax’s second loss in an NXT Women’s Championship match, so I’m not thinking she’ll actually win the title any time soon. In fact, she might not stay in NXT much longer.

But neither should Asuka. Her style might not exactly translate to the main roster right now, but with the upcoming brand split of WWE’s main roster, Asuka could benefit from being called up, whether she’s still NXT Women’s Champion or not. NXT right now is her home, and that’s great, but there’s going to have to be an influx of new women at that level to make Asuka’s stay there worth it.

The Demon character of Bálor is always a fun one to watch enter an arena. Joe’s intensity is off the charts and that alone sells a feud for me. He had that during his run with TNA various times when he wasn’t portrayed as a joke of a character.

The feud between the two has been really good, but falls short of great. I love watching both of these guys perform, but their storyline has been done before, and has been done better before by others. That’s not a slight on them at all, but maybe it’s just because my expectations were too high.

Joe tried escaping the cage early. He hates Bálor. That kind of didn’t make sense to me at all. Joe’s character isn’t to try to escape to get a win, it’s to punish. I was sold on both of these guys ready to have an epic blood feud type of match, and Joe and Bálor trying to escape was, dare I say, lame?

I’ve never been a fan of the “escape the cage” rule, and I’d rather steel cage matches have a finish that’s either by pinfall, submission or knockout. That makes sense. Escaping the cage kind of defeats the purpose of the match. I know it’s meant for heels to be more hated because they could escape and win a match without the face looking bad. In NXT, Joe’s not that type of heel. For this match to feel like a true end of a feud, an escape should have been ruled out.

Did @wwebalor just hit a #SlingBlade off the top rope inside the #SteelCage?! #NXTTakeOver pic.twitter.com/L6SL18vyzz

Would it have made the match better? Who knows? But at least it made the most sense.

I enjoyed the way both of them played up the steel cage factor when they used it for punishing the other. Joe hit a Muscle Buster but Bálor kicked out, as has become the norm for the first Muscle Buster of the match. Bálor gained the advantage and hit his Coup de Grace finisher, but Joe kicked out of that.

Bálor would then try to escape the cage, but Joe caught him and hit him with the Muscle Buster off the middle rope to retain his NXT Championship.

All in all, this probably wasn’t in the top three all-time NXT TakeOver specials, but that doesn’t mean it was a bad show. In fact, I was pleasantly surprised because I didn’t know what to expect from the undercard heading into this event. The main event was as good as I expected it to be, and the Tag Team Title match was great. Asuka and Jax delivered and Nakamura and Aries had a fun match.

I look forward to seeing what different feuds come out of this night. Before the main event began, NXT aired an interview with William Regal that took place earlier Wednesday and we saw Bobby Roode head into the locker room. I thought we would see him come out at the end of the event to start a new feud with either Joe or Bálor, but that didn’t happen. It’ll be interesting to see what comes of that.