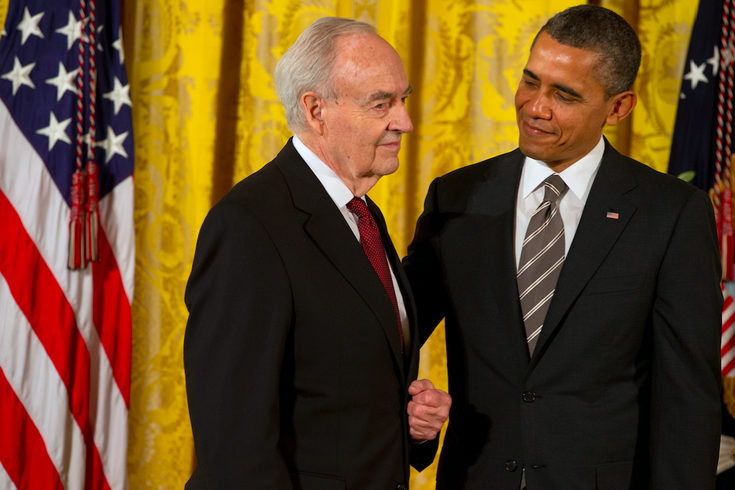 President Barack Obama presents a 2012 Citizens Medal to former Pennsylvania Sen., and former CEO of the Corporation for National and Community Service Harris Wofford, Friday, Feb. 15, 2013, in the East Room of the White House in Washington.

In a powerful column written for The New York Times, former U.S. Sen. Harris Wofford from Pennsylvania announced his upcoming marriage to a man with whom he has spent the last 15 years.

Wofford, 90, a Democrat, represented Pennsylvania in the Senate from 1991-1995 after winning a special election brought about by the death of Sen. H. John Heinz III. He had been married to Clare Wofford for 48 years and the couple had three children together before she died of cancer in January 1996.

In his column with the headline "Finding Love Again, This Time With a Man," Wofford said he was moved by the importance of finding "creative hours" in life, a message he embraced after he and Clare visited philosopher Martin Buber in Jerusalem in 1963.

We were both about to turn 70 when she died. I assumed that I was too old to seek or expect another romance. But five years later, standing on a beach in Fort Lauderdale, Fla., I sensed a creative hour and did not want to miss it...

Too often, our society seeks to label people by pinning them on the wall — straight, gay or in between. I don’t categorize myself based on the gender of those I love. I had a half-century of marriage with a wonderful woman, and now am lucky for a second time to have found happiness.

Wofford, who once served as a special assistant for civil rights to President John F. Kennedy and an unofficial adviser to Martin Luther King Jr., will marry Matthew Charlton on Saturday.

Read the full column at The New York Times.