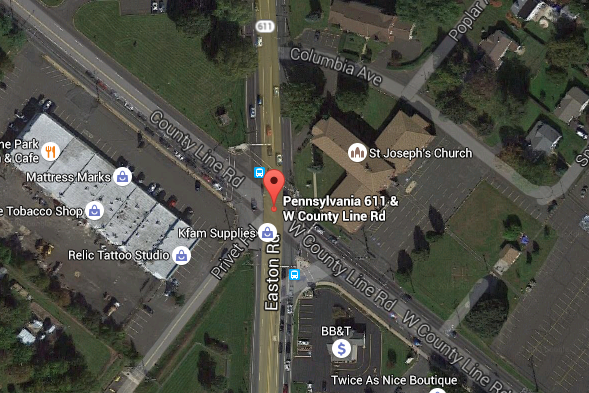 The intersection of County Line Road and Route 611 in Horsham where an accident left a 25-year-old man dead.

Prosecutors are investigating a weekend crash in Horsham that left a young man dead.

The Montgomery County District Attorney's Office announced Monday that along with Horsham Township Police they are looking into the cause of the accident that occurred around 2 a.m. Sunday.

Officials say based on initial findings, it appears a tractor trailer traveling southbound on Route 611 slammed into a Hyundai going northbound and making a left onto County Line Road.

A passenger in the Hyundai, 25-year-old Erik Detweiler of Quakertown, was found dead in the front seat. The driver of the car was treated at Abington Hospital.

Detweiler graduated from Quakertown High School in 2008 and was currently living in California, according to The Intelligencer.

His father, Royden Detweiller, told the newspaper his family was still coping with the death:

"I can't put it into words," he said. "We're just in a fog. It's very difficult to deal with and it's going to be a long time before we come to terms with this."

The investigation will look into whether alcohol or controlled substances played a part in the accident and a crash reconstruction will be carried out to help figure out the cause.