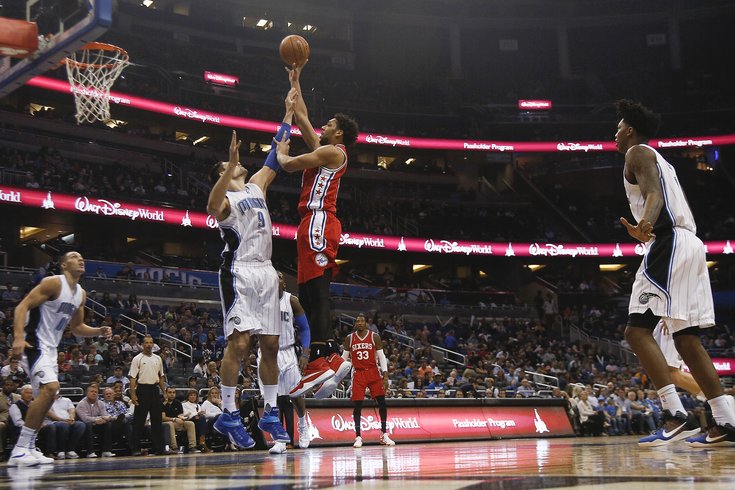 For the second game in a row, the Philadelphia 76ers were without their leading scorer, rookie center Jahlil Okafor, in their 119-99 loss to the Charlotte Hornets on Wednesday night.

Okafor, who is averaging 17.5 points and seven rebounds per game, also missed Monday’s game against the Washington Wizards after he bruised his right shin during the team’s 130-116 loss to the Orlando Magic on Sunday when he collided with Sixers guard Isaiah Canaan.

It originally looked as though Okafor would return to the lineup against Charlotte, as he was listed as the starter on the pregame stat sheet but was later removed, with Nerlens Noel sliding into his spot and Jerami Grant starting at the four. That's actually a good sign moving forward since it likely indicates that Okafor was close to returning, but the team decided at the last minute to give him a few more days off.

After all, it's not like this game had any playoff implications for the Sixers.

However, the Sixers almost needed Okafor, as Noel collided awkwardly with Cody Zeller late in the first half. After spending a few minutes face down on the court, walked back to the locker room under his own power.

The team announced that Noel would be available for the second half after suffering a right knee contusion. And sure enough, Noel was back out on the floor for the start of the second half.

He finished with 17 points, four assists, and three rebounds in the loss and was limited to 27 minutes due to foul trouble, the aforementioned injury scare, and the game getting out of hand in the late stages.

"We missed Jah tonight. No doubt," coach Brett Brown said after the game.

The Sixers don't play Thursday, so that will give Okafor a chance to heal before their next game. They return to action on Friday night when they host Dwyane Wade and the Miami Heat at the Wells Fargo Center.

EMBIID BACK IN PHILLY

Prior to their team facing the Hornets, Sixers fans got a look at Joel Embiid for the first time since he returned from rehab and training in Qatar.

“He’s at this facility called Aspetar in Qatar that is an interesting place, and one that we’ve been looking at for six months that’s world-renowned for having some of the best sports medicine docs and rehab specialists and orthopedic surgeons and sports psychologists and dietitians and the whole gamut, sort of soup to nuts. He’s there on a fairly intense program for a few days and will be back maybe by then end of the week.

“[The program] is one that’s custom designed for him that we’ve been putting in place over the past several months and is an evaluation that kicks off the next phase of his rehab. Lots of training, lots of simple stuff to sort of look in. It’s another check before the next step. We’ve done a lot of these types of things, but maybe this one’s more popular because he’s on the other side of the globe. We sent some of our personnel with him, and he’s doing great.”  [READ MORE]

During that same press conference, Hinkie also added that while Embiid returning for summer league action remains unlikely, the Sixers expect that he'll be "raring to go for next season."

The soon-to-be-22-year-old center has yet to play for the team that drafted him third overall in the 2014 NBA Draft due to a seemingly endless string of injuries. But prior to tip -- as he often is when the Sixers play at home -- the Kansas product was out on the court working on his shot, and even draining some left-handed threes.

The Sixers declined to deal one their two young big-men — Noel being the other — prior to last month’s trade deadline, largely because Embiid’s future is a hard one to predict due all the injuries in his past.

So far this season, Okafor and Noel have struggled at times when on the court together and have the second-worst point differential* of any two-man combination on the team.

*Heading into play on Wednesday night.

That continues to puzzle me -- aside from how they impact spacing on the floor -- due to the fact that they both play very different styles; Okafor is the much better offensive player, while Noel dominates on the defensive end.

But that's another story for another day.