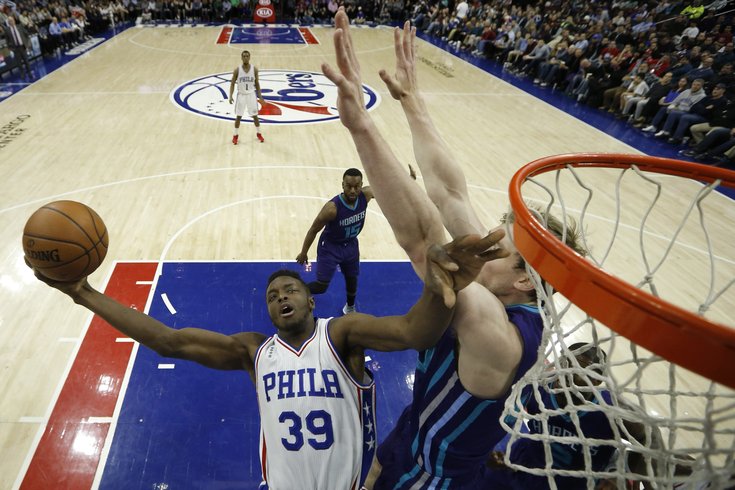 Looking for their first win against a current Eastern Conference playoff team and without rookie center Jahlil Okafor, the Philadelphia 76ers came up empty again on Wednesday night, falling to the Charlotte Hornets, 119-99, at the Wells Fargo Center.

For Brett Brown's team, the loss was their 14th in their last 15 games and dropped them to 8-53 on the season.

Despite missing their leading scorer in Okafor, who was out for the second straight game with a bruised right shin, the Sixers kept it close much of the night -- although the final score may indicate otherwise. Even when the Hornets stretched the lead to 14 early in the second half, the Sixers were able to get it back to a tie midway through the third quarter, thanks in large part to some hot outside shooting.

Ultimately, however, the Hornets would rebuild their lead to nine points heading into the fourth. And this time, there would be no comeback for the home team.

Here are some more observations from the game.

•    For much of the night, the Sixers actually shot better from beyond the arc than they did from inside it.

Through three quarters, the team was still shooting better from deep. They were 12-of-35 (34.3 percent) on two-point field goals but were 12-of-28 (42.9 percent) from three. By the time the game ended, the gap had closed a bit more, due in large part to the Sixers desperately trying to catch up as the Hornets pulled away.

•    Speaking of Canaan, he was one of three Sixers with 17 points. The others were Noel and Robert Covington. Kemba Walker led the way for the Hornets with 30 points to go with seven rebounds and a pair of assists.

•    As previously mentioned, Okafor missed his second game in a row after suffering a bruised shin in Sunday's loss to the Magic. More on what his absence meant for the Sixers, here.

•    It was Harvey Pollack Night at the Wells Fargo Center, as the team honored the Hall of Fame stat guru on the anniversary of Wilt Chamberlain's 100-point game.

•    I feel bad for whoever got stuck sitting next to Elton Brand on the Sixers bench. He was out with a very specific, uh, shall we say "ailment."

Elton Brand out for #Sixers with “Gastroenteritis,” which just sounds like something an old person would have… pic.twitter.com/QYMxq8N61W

•    Keeping with the theme of "old," the Delaware 87ers signed former NBA All-Star Baron Davis from the pool of available players. Davis hasn't played since the 2011-12 season (with the Knicks), so it will be interesting to what, if anything, he has left in the tank. When I first heard the news, I was shocked to learn that Davis is "only" 36-years-old. I thought he was older, especially since he's already been out of the league four years.

Coincidentally, the team press release at no point mentioned his age. That may be the first time I've ever seen that.

•    It was not the best of nights for Nik Stauskas and Richaun Holmes, who were a combined 2-for-11 against the Hornets, including 1-for-6 from three. Of the nine Sixers players who got in the game, Holmes was the only one who failed to score. Stauskas was close to joining him, as his first bucket came with less than two minutes remaining.

The Sixers will get two shots to finally beat an Eastern Conference playoff-bound team this weekend when they play a home-and-home against the Miami Heat, who entered play Wednesday night as the four-seed in the East.

They'll then return home next week for three games (Rockets, Nets and Pistons) in South Philly.