Opinions run rampant over Michael Wolff’s ‘Fire and Fury,’ despite many having never read it 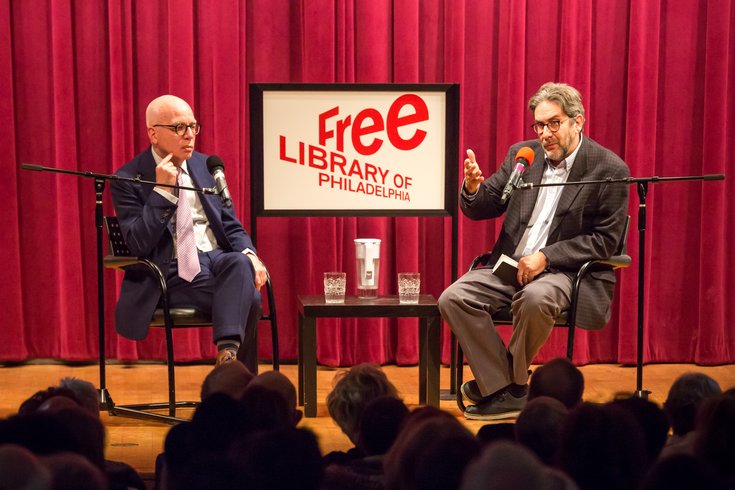 Michael Wolff, author of "Fire and Fury: Inside the Trump White House," speaks with Dick Polman of WHYY News at the Free Library of Philadelphia, on Jan. 16, 2018.

Before you even strolled into the main hall of Vine Street’s Central Library of the Free Library of Philadelphia on Tuesday night, the buzz was deafening.

You could blame the full house of concerned citizens and curiosity seekers chatting incessantly, or the Free Library’s officiates working to seat late-comers and collect audience questions. Not since Bruce Springsteen appeared at this same branch to sign copies of his Born to Run memoir in 2016 had the din of the Free Library been so loud.

The crowd on this night gathered for the appearance of Michael Wolff – the notorious author of Fire and Fury: Inside the Trump White House, a runaway bestseller – already in its 11th printing since its release date of Jan. 5. The writer made the Central Library the first stop on his national book tour, and the fervor of the crowd – some who had driven hours to get there – was palpable.

“I read the press, and this book and Wolff are already a part of the national conversation, and I wanted to be here for that,” said Bill Ross, a book seller from Indianapolis, Md., who had not read Fire and Fury before this library’s chat, but was set to purchase four copies of Wolff’s tome for his shop.

“I’m not sure I will read it as I have seen many clips on television. Besides, I have a lot of other reading to do. Trump is what Trump is.” 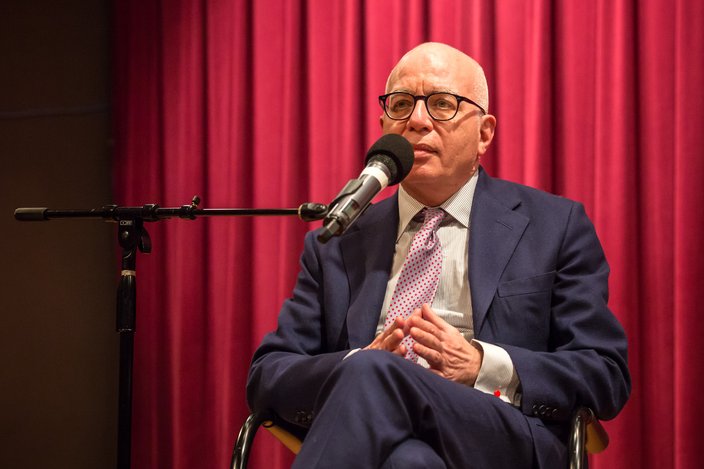 Michael Wolff, author of “Fire and Fury: Inside the Trump White House,” pauses for a moment while speaking before hundreds of attendees at the Free Library of Philadelphia, Jan. 16, 2018.

Oddly enough, not one person polled – before or after Wolff’s staged conversation with Dick Polman, the national political columnist at WHYY News – had read Fire and Fury. Several of the night’s attendees offered up the same reason as Ross.

“I’ve seen a lot of Wolff on television, so I don’t how much more there is to say,” said Alexis Maniscalco, who, along with her roommate, Domenic Borrasso, bought nine copies of the book to get signed as gifts for their friends.

“We couldn’t find it in bookstores locally,” said Maniscalco.

“By the way, we’re no Trump supporters,” added Borrasso with a laugh.

From the temperature of the room during Wolff and Polman’s conversation, Trump had few friends.

Before the chat between the author and the interviewer began, Polman got the first laugh when he noted how that very morning, the results of Trump’s physical were released and that, contrary to the tone of Wolff’s book, the president had grown in office (Trump is now taller than when he entered the Oval Office – grew from 6 ft. 2 in. to 6 ft. 3 in.)

Along with getting chuckles after telling the audience that his talent was “overview” (rather than pounding a daily reporter’s grind where “today’s explosion means you’ve forgotten about yesterday’s explosion”), Wolff got laughs by stating that Trump’s staff regarded the president as “appallingly stupid.” No one in the room said a word, pro or anti-Trump, when Wolff referred to his charge as “a fool.” 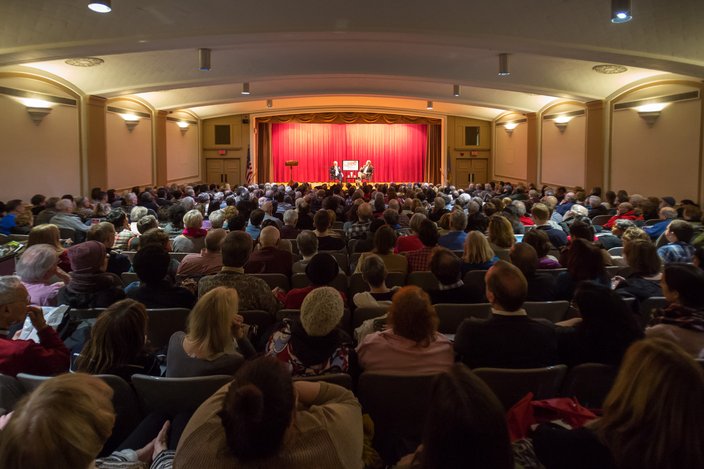 Hundreds came to the Free Library of Philadelphia, Tuesday, Jan. 16, to watch a conversation with author Michael Wolff and Dick Polman of WHYY.

The author then found his sentence finished by several audience members at once when he inferred that “the man is just…” “A liar!,” came the chorus. Another noisy hush came over the crowd when Wolff said it must pain every member of Trump’s staff to now know that there is something wrong with their president.

After the chat, there were questions from the Philly audience that had been written anonymously on tiny note cards collected by library officials before the start of the program. One question asked how the news media itself seemed predisposed to not believe the entirety of Fire and Fury. To this, Wolff blithely responded, “If the book speaks to you, that’s great.” With that, Polman acknowledged Wolff’s response as being much like comic Fred Armisen’s imitation of Wolff from “Saturday Night Live” last weekend. 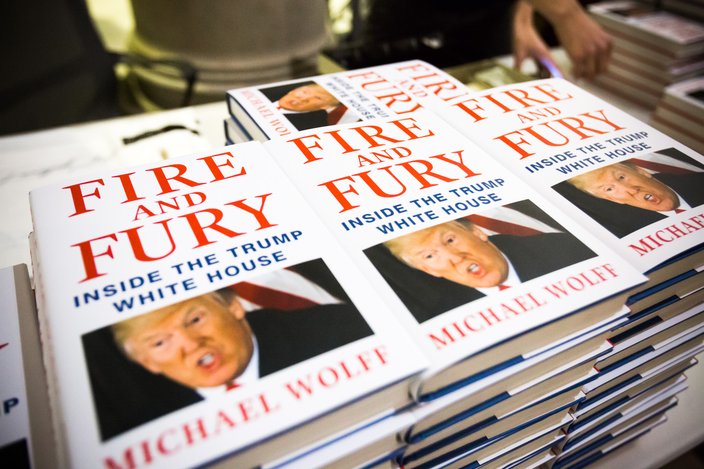 Copies of “Fire and Fury: Inside the Trump White House,” were available to be purchased at the Free Library of Philadelphia during the conversation with the book's author, Michael Wolff, and Dick Polman of WHYY News, Jan. 16, 2018.

When another query reminded Wolff that he had probably burned bridges in his line of questioning, he joked about never going back to the White House anyway, and that his style was more about “setting a scene, an emotional tenor,” rather than worrying about the minutiae of a beat reporter.


After the conversation, several attendees admitted that they enjoyed Wolff and the chat, but probably still would not read the book. Angela Steele from Mount Airy, who works for a nonprofit that builds affordable housing for seniors, was at the Free Library last night because she enjoys its reading programs and, “wanted to see what this cultural phenomenon was all about.

"What more could we learn from the book or was it all confirmation? It seems as if it is the latter as it further proves that this is an incompetent administration,” she said.

David Kahn, a Fishtown educator, had not read Fire and Fury, but was fascinated by the heat Wolff has generated.

“The author came across as well-reasoned, but I always felt this way about Trump. He’s not fit. He’s an entertainer – a bombastic Manhattan entertainer. These stories of Wolff’s don’t surprise me in the least.”