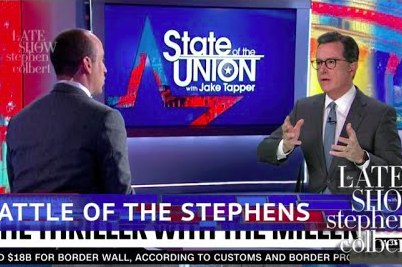 Stephen Colbert substitutes himself for Jake Tapper in "State of the Union" interview with White House advisor Stephen Miller.

For the past several days — North Korea and immigration reform aside — the talk surrounding Capitol Hill has been all about Jake Tapper's cutting takedown of White House senior policy advisor Stephen Miller, who joined the CNN host for an interview that aired Sunday on "State of the Union."

Tapper, a Philly native, first listened to Miller bash Michael Wolff's "grotesque" new book "Fire and Fury," which paints a disturbing picture of dysfunction inside the Trump administration. He then attacked CNN's "salacious" reporting on the book and praised Trump as a "political genius."

Twelve minutes in, Tapper could take no more, calling Miller "obsequious" for his seeming attempt to score points with President Trump. The CNN host then cut the interview short and jumped into a teaser for the next segment.

A partial transcript of what happened next off the air showed a tense exchange, one that reportedly led Miller to be escorted off the set. Miller went on FOX News the next day and told Tucker Carlson that wasn't true, further bashing CNN in the process.

Here’s a transcript of at least part of the not-seen-on-TV conversation between Stephen Miller and @jaketapper during the commercial break that followed the @CNNSotu interview... pic.twitter.com/NhBFrEeesA

Stephen Colbert, another one of Trump's nemeses, decided to weigh in on the ugly episode by swapping himself in for Tapper.  It's hard to say whether the edited interview or the original is more confrontational — or even more funny, for that matter.