Details on The Oval+ 2019, a pop-up park on the Benjamin Franklin Parkway

By Sinead Cummings
PhillyVoice Staff
Family-Friendly The Oval
from 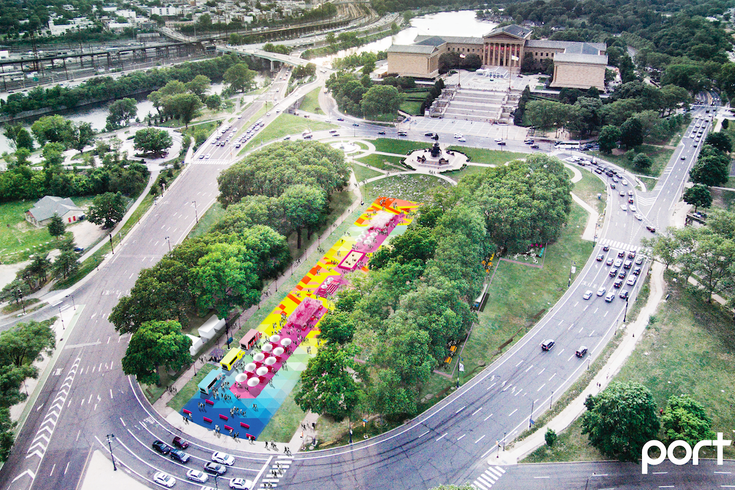 Rendering of The Oval+ 2019/by PORT Urbanism

The Oval+ will be back for four weeks this summer, starting Friday, July 19. This year, there will be even more family-friendly programming along the Benjamin Franklin Parkway.

New things to check out at The Oval+ include a double-decker bus turned snack stand, a pop-up basketball court and a shipping container that's been converted into an art-making space.

Last year, part of the Parkway was closed off to traffic for the pop-up park. Fairmount Park Conservancy and Philadelphia Parks & Recreation surveyed visitors and 80 percent said they wanted lanes of the Parkway closed in the future.

This input led to the increase of programming beyond the perimeter of Eakins Oval for 2019.

On the Parkway, there will be a "MAKE" block in front of the Barnes Foundation with outdoor reading and music rooms and a space for art and design. Also, on Sundays, there will be a street market on the block.

The "HEAR" block will be located in front of the Rodin Museum. There will be art installations, stadium seating and a double-decker bus that will function as both music venue and snack stand. Thursdays will feature live performances by groups like BalletX and visitors will be able to hang out inside and on top of the bus while enjoying live music and radio broadcasts. To snack on, there will be Rita's Italian Ice, soft pretzels and beverages by Mainstay Brewing Company and La Colombe.

Next to that will be the "PLAY" block, where there will be a pop-up basketball court, tether ball, badminton, ping-pong tables and bleachers. Visitors can participate in a ping-pong tournament hosted by SPiN every Friday. 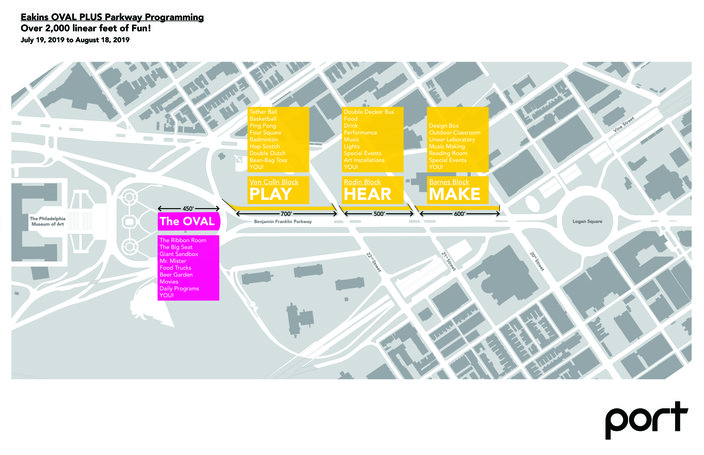 Map of The Oval+ programming on the Benjamin Franklin Parkway.

"This year's celebrations will bring countless new offerings for a wide, diverse audience. Kids, teens and adults of all backgrounds and interests are guaranteed to find something to enjoy," said Parks & Recreation Commissioner Kathryn Ott Lovell.

From Friday, July 5, to Sunday, Aug. 25, vehicle traffic will be redirected in the following ways: