Over-under on former Andy Reid players being whacked this offseason by the Eagles: 11.5 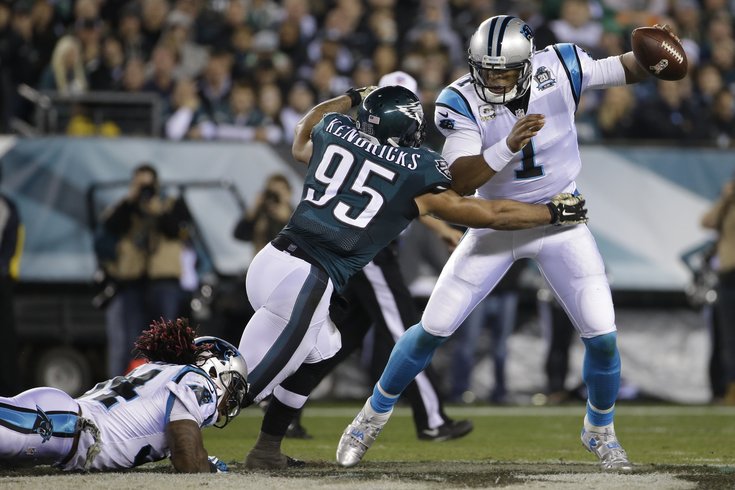 Mychal Kendricks is an emerging young defender, but the media and fan base may value him more highly than the Eagles' coaching staff.

The Eagles entered the 2015 offseason with 22 former Andy Reid players on the roster. It's only April, and almost a third of them are already gone. There will almost certainly be more. Let's take a look at each of the old Andy guys and analyze their chances of remaining with the team.

• 14 WR Riley Cooper - The Eagles signed Cooper to a long-term deal after what may have been a flukey half season in 2013. If Cooper's contract wasn't so prohibitive to cut him, he would probably already be gone, but he's likely safe in 2015.

• 22 CB Brandon Boykin - The Eagles have proven by now that Boykin isn't ever going to be given a legitimate shot to start on the outside, no matter how much they say he'll compete for the job in training camp. Last season, the Eagles wrongly stuck with Bradley Fletcher at one corner spot all the way up until they were eliminated from playoff contention. And by the time the Eagles made the long overdue decision to bench Fletcher, they started Nolan Carroll on the outside, not Boykin. This offseason, the Eagles signed Byron Maxwell, they still have Carroll on the roster, they recently signed slot corner Walter Thurmond, and a report emerged that Boykin is on the trading block. I'd lean toward Boykin being in another uniform Week 1.

• 32 RB Chris Polk - The Eagles traded McCoy, but then added a pair of backs in DeMarco Murray and Ryan Mathews. With Darren Sproles on the roster already, and Polk not being a stellar special teams player, I'm not sure that he really fits anymore on the roster. Polk has yet to sign his restricted free agent tender. Polk is a skilled player, but he has struggled staying healthy. He could be a goner.

• 46 LS Jon Dorenbos - The Eagles made the curious decision to bring in Navy long snapper Joe Cardona for a pre-draft visit. If the Eagles can sign Cardona as an undrafted free agent and he can at least come close to beating out Dorenbos for the job, he could be a younger, cheaper alternative. Dorenbos will turn 35 in July and count for $1,070,000 against the cap in 2015. If the Eagles do indeed sign Cardona, Dorenbos' days are probably numbered.

• 55 OLB Brandon Graham - Graham will stick around a while after re-signing with the Eagles on a four year deal.

• 59 ILB DeMeco Ryans - Ryans signed a one year extension that will keep him under contract through 2016.

• 62 C Jason Kelce - Kelce is under contract through 2020, and is a Chip Kelly favorite. He's not going anywhere anytime soon.

• 67 OG Dennis Kelly - Assuming the Eagles add OL help in the draft, Kelly will likely begin training camp on the outside looking in.

• 69 OG Evan Mathis - The Eagles have tried to trade Mathis in each of the last two seasons, but with Mathis being the oldest projected starting OG in the NFL carrying a fairly hefty contract, the Eagles haven't found a lot of interest. Mathis is still a very good player, but there's a report out there by Geoff Mosher of CSN Philly that the Eagles could cut Mathis if they can't find a trade partner for him. Still, I'd bet he sticks around once again in 2015. 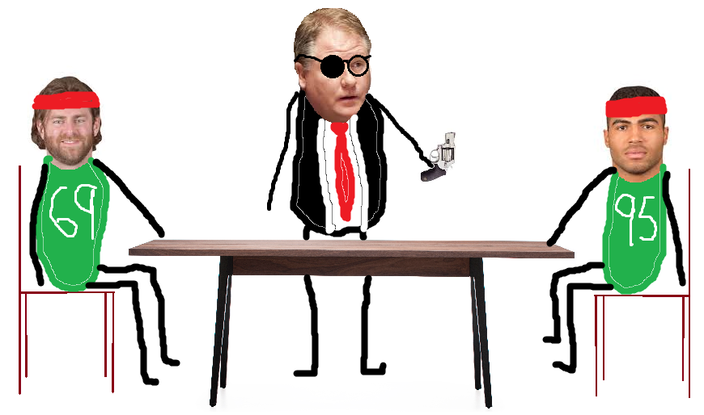 • 72 DE Cedric Thornton - Thornton signed his restricted free agent tender and should be a starting DE for the Eagles in 2015. If the Eagles can't work out a long term deal with him, he'll be an unrestricted free agent after this season. Thornton hasn't been discussed as trade bait, but I wouldn't rule it out if he's looking for more money than what the Eagles would prefer to spend on him.

• 75 DE Vinny Curry - Curry is an imperfect fit in the Eagles' 3-4, but has produced when he has gotten opportunities in obvious passing situations. He is a fairly obvious trade bait option heading into the final year of his deal.

• 91 DE Fletcher Cox - If you include the fifth year option the Eagles hold with Cox, they control his rights through 2016. Many fans think that trading Cox is unthinkable, but he's perhaps the best trade chip the Eagles have outside of Sam Bradford. If Cox helps allow the Eagles to make a bold move for, um, whoever, it wouldn't surprise me in the slightest to see Cox dealt.

• 95 ILB Mychal Kendricks - The Eagles traded for Kiko Alonso and re-signed DeMeco Ryans to a contract extension. That leaves starting ILB Mychal Kendricks' future with the team in doubt. In 2014, the Eagles suffered a number of losses at ILB during the season. They lost Ryans to an Achilles tear mid-season, Najee Goode for the season Week 1, and Kendricks missed four games. That has led some to ponder the idea of simply keeping Alonso, Ryans and Kendricks for depth purposes, but the Eagles are in decent shape at ILB, in terms of depth. Goode will return this season, and the Eagles added Brad Jones as a free agent signing. Kendricks is in the final year of his contract, and if you can flip him for a valuable asset at another position before he bolts in free agency in a year, then go ahead ahead do it if it makes your roster better as a whole. I would lean toward Kendricks being on another roster Week 1.

There are seven former Andy guys down. What will the total be by Week 1? The over-under is set at 11.5.