Without stability at QB, the Eagles aren't going anywhere 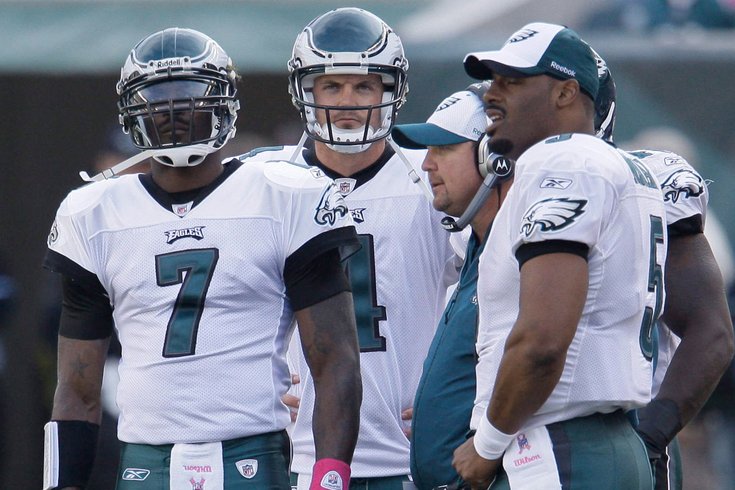 Assuming Donovan McNabb or Kevin Kolb don't make miraculous comebacks, or that the Eagles don't re-sign Michael Vick or trade Sam Bradford back to the Rams for Nick Foles, in 2015 the Eagles will have their fifth different Week 1 starter at quarterback in the last seven years. That is extreme instability at the most important position in sports.

Below is a list of every team in the NFL, and how many quarterbacks they have started Week 1 since 2009:

When the 2015 season begins, there will be 11 teams who will likely be starting at least their fourth QB in the last seven years. They are the Rams, Bills, Buccaneers, Redskins, Jaguars, Titans, Vikings, Browns, Raiders, Cardinals, and Eagles. The combined number of playoff wins those teams have since 2010?

Meanwhile, the Super Bowl winners since 2009 have been the following teams: Saints, Packers, Giants, Ravens, Seahawks, and Patriots. The Seahawks aside, I'll let you figure out what those teams have in common in the chart above.

As the Eagles' roster currently stands, their starting quarterback heading into Week 1 is Sam Bradford, who as we all know, is coming off a pair of ACL tears in consecutive seasons and has a contract set to expire after the 2015 season. Let's say the Eagles go into the 2015 season with Bradford as the starter. If you listed the teams around the league who were likely to have someone different behind center in 2016 from their 2015 Week 1 starter, the Eagles would be near the top of the list.

In the NFL, you either have a franchise quarterback, or you don't. And if you don't, you have no chance unless you have some kind of historic defense like the 2000 Ravens or the 2002 Buccaneers. The Eagles don't have a historic defense. Well, it's not historic in a good way, anyway. And obviously, they certainly don't have a "franchise QB."

"Mortgaging the future" for a QB is bad, or so I've heard. Then again, starting the season with a new QB every year isn't so awesome either.