Over the Weekend: Squeeze @ the Keswick 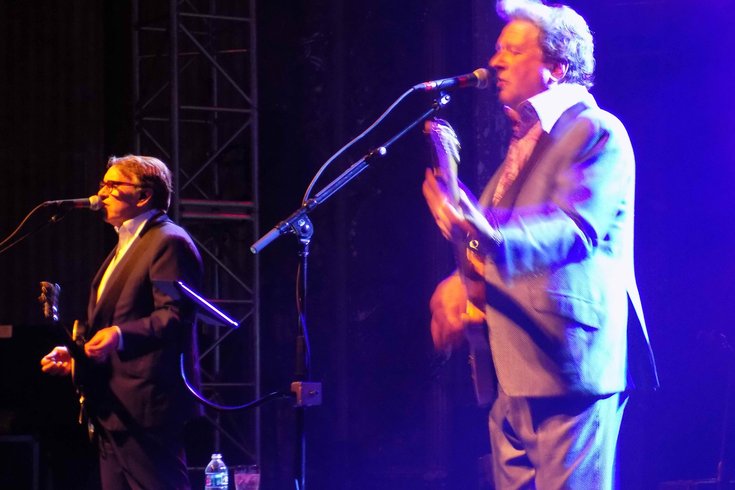 Chris Gifford (left) and Glenn Tillbrook at the Keswick Oct. 14.

Glenn Tilbrook could stand on stage and sing “I take his ass to Red Lobster”* and it would sound like a Squeeze song. That is how distinctive his voice is, 43 years after forming the band in South London with his friend Chris Gifford, whose own sublime deep voice still provides a unique harmony. Everyone in the backing band behind them is different — and noticeably younger — but the songs are the same, and still fantastic to sing along to.

Friday night’s show at the Keswick Theatre began with “Hourglass,” their popular hit from 1987 that got the band proper MTV rotation. Then they delved into all the hits that made them one of the most popular New Wave bands of the 1980s: “Is That Love,” “Another Nail in My Heart,” “Goodbye Girl,” “Cool for Cats,” and of course, “Pulling Mussels from a Shell” and “Tempted.”

They threw in some covers too, owing — I believe — to their understanding that Gen Xers love a good live cover song. They played The Easybeats’ “Friday on My Mind” to remind everyone that they’re English, Jeannie C. Riley’s “Harper Valley PTA” to remind everyone of the ’80s and Tom Waits’ “I Don’t Wanna Grow Up” to remind everyone that Squeeze is still cool as hell. They also offered new songs from 2015’s album, “Cradle to the Grave,” on which they embrace nostalgia head-on and sing sweetly about soccer and sweet memories, instead of heartbreak and drunken nights out.

Those songs, the ones about the heartbreak and drunken nights out, still sound amazing, and they ended the night with a fully charged version of “Take Me, I’m Yours.” And we did.

The English Beat opened the show and they were equally amazing. Original members Dave Wakeling and Ranking Roger — along with the well-preserved Tilbrook and Gifford — prove that coming of age in the sweaty clubs of 1980s London does a body good.

* That’s from a Beyoncé song, Gen Xers. It’s from the one your kids like.