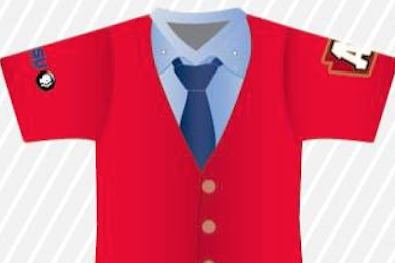 A shot of the Mister Rogers jerseys that the Altoona Curve will wear during a game in July.

The Altoona Curve will pay homage to Mister Rogers by wearing jerseys inspired by the late television host.

On July 5, the double-A affiliate of the Pittsburgh Pirates will be donning the uniforms that mimic the cardigan sweaters Fred Rogers was famous for wearing while hosting the long-running children's television show "Mister Rogers Neighborhood."

The jersey's are apart of the team's "A Night in the Neighborhood" promotion, which is being run in conjunction with Penn State Public Broadcasting (WPSU) and The Fred Rogers Company.

At the end of the game against the Harrisburg Senators, the jerseys will be auctioned off and the proceeds will go toward WPSU's community engagement efforts.

July 5th is A Night in the Neighborhood w/Daniel Tiger + Mister Rogers' Sweater Jerseys. Be ours? #NeighborhoodNight pic.twitter.com/CD8fTVlQXI

Rogers, who passed away in 2003, was born in Latrobe, Pennsylvania. He hosted "Mister Rogers' Neighborhood" from 1963-2001, airing out of a studio in Pittsburgh from 1966 until the show's end.