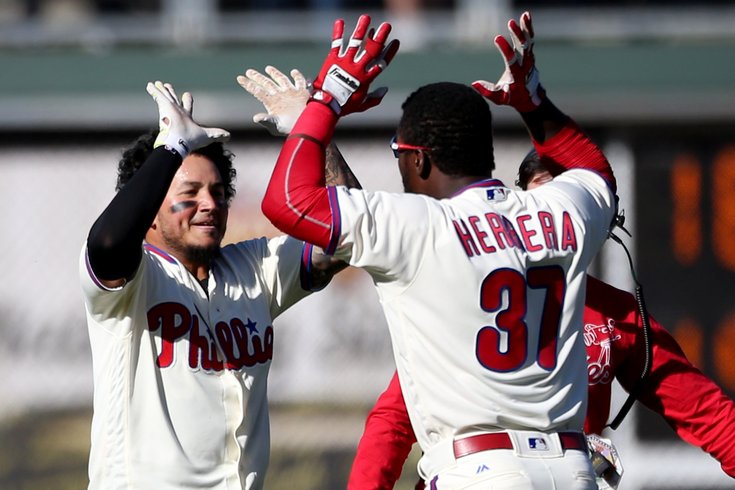 Freddy Galvis, who knocked in the game-winning run, and Odubel Herrera celebrate the Phillies' walk-off win over Jonathan Papelbon and the Nationals on Sunday.

After a weekend of watching his Washington Nationals roll over the Phillies, winning by large enough margins that a save opportunity never came, Jonathan Papelbon didn’t get to have his Sunday afternoon off, too.
He was called on in the bottom of the 10th inning at Citizens Bank Park. He was asked to hold a one-run lead, thanks to Bryce Harper’s go-ahead solo home run in the top half of the inning.

Papelbon, a perfect 5-for-5 in save opportunities this season entering the weekend, was not perfect on Sunday. He entered his old home ballpark to boos … and left to cheers.

Freddy Galvis completed a two-out rally by going the opposite way on a 1-2 Papelbon pitch, sending a double all the way to the wall in left, scoring Andres Blanco and giving the Phillies a 3-2, walk-off win over Washington.

The victory helped the Phillies avoid a sweep. The loss was just the second of the season for the Nationals.

“That was great,” manager Pete Mackanin said. “The guys just stepped up and came through for us. It was great too see, a lot of fun.”

More fun because it came off Pap, who enjoyed being a villain in South Philly even when he was wearing a Phillies uniform?

“He is the villain,” Mackanin said. “Closers are villains to visiting teams. I like the guy. But it’s good to beat any closer. I’m happy about that.”

Papelbon is 0-for-2 in save opportunities at Citizens Bank Park since being traded away from the Phillies last July. He’s only blown three saves, period, since the trade.

Two of the three have come against his old team. He also has two losses and a 12.27 ERA in four games against the Phillies since being traded.

“All of them suck,” Papelbon said if blowing a game felt worse in Philadelphia, a place he never warmed to despite the team giving him $50 million, the largest contract ever awarded to a relief pitcher in baseball history.

“Your job is to go out there and preserve the win,” Papelbon continued. “When you don’t do your job, you gotta learn how to turn the page and move on and go to Miami and win another series. I’ve blown plenty of these in the past. I know how to handle them. I’ll move on and come ready to work and get another save tomorrow. That’s just pretty much how it works, keep the line moving.”

Galvis had has his own success in keeping the line moving late in games.

One of the light-hitting shortstop’s most memorable hits in the big leagues came three years ago, when he followed a home run by Erik Kratz with one of his own, a walk-off shot off flame-throwing Cincinnati Reds closer Aroldis Chapman. Galvis struck again last September, much like he did on Sunday: after Washington scored a run in the top half of the 10th in a game on Sept. 14, Galvis homered off … Jonathan Papelbon to tie the game in the bottom of the 10. The Phils lost in extra innings that night.

Galvis has three walk-off hits in his career. So what’s with Galvis and late-innings heroics?

“One of his issues is he’s a little bit overaggressive, swings at pitches he shouldn’t be swinging at,” Mackanin said of Galvis, a career .241 hitter who was hitting .225 in 12 games this season entering Sunday. “On the other hand, you like to see aggressive hitters when the game is on the line and you’re trying to win the game. He took a nice swing on that, really didn’t swing hard, but dropped the head on it and the ball carried.”

“I just try to get focused a little bit more,” Galvis said of his game-on-the-line at-bats. “I know the situation, I just want to concentrate and try to put the ball in play. I got a fastball to hit today, and then he threw me anther fastball and I put a good swing on it.”

And his success off Papelbon in particular?

“I played behind him … I know the way he pitches and a little of what the ball does,” Galvis said. “I think he has a split and a fastball and he like to throw the fastball. So it’s something to be aware of. I think he threw me four or five fastballs … so I was ready for it.”

The only drama after the ball left his bat was whether it would fall in. But another ex-Phillie, Jayson Werth, didn’t have much of a chance.

“Thank God he didn’t get it,” Galvis said with a laugh.