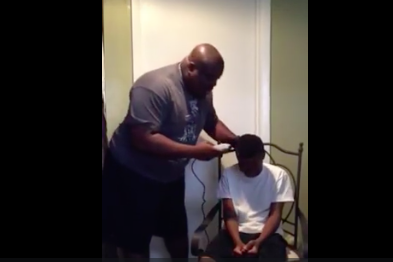 In a video that has been viewed more than 18 million times, Wayman Gresham sparks a discussion about cyber shaming children.

Searching "parents shaming kids" on YouTube will turn up a slew of videos showing parents using public shaming and embarrassment as a form of discipline against their misbehaving children.

This viral video below shows a father reading aloud a Facebook post his daughter wrote complaining about her parents making her do chores. It has garnered more than 40 million views.

In another viral video, a Denver mom makes public an interaction with her 13-year-old daughter after discovering she had posted racy photos online and pretended to be 19 years old.

“She watches Disney Channel,” the mom said to the camera. “She has a bedtime..." Her daughter is shown standing beside her crying.

But regardless of the intent, cyber shaming children as a means of discipline has become a controversial topic, with some saying parents are taking it too far.

A Florida father decided to take a stand against publicly shaming kids online by posting a video that appeared to show him preparing to shame his son by shaving his head, but just as he lifts the buzzer to his son's head, the two embrace in a hug.

The father, Wayman Gresham, goes on to oppose shaming. The video has been viewed more than 18 million times - and counting - and thousands of people have shown support for Gresham through comments.