Paul Hagen: The Phillies should STILL break the bank for Gerrit Cole, and here's why 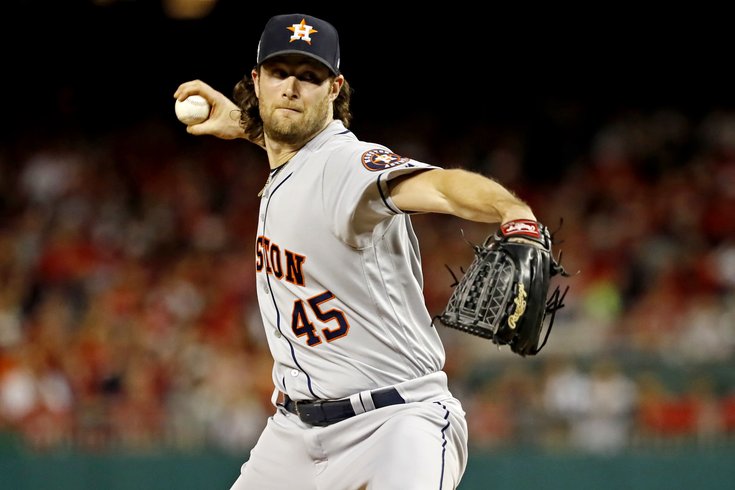 Gerrit Cole is the best free agent available this offseason by far.

It’s time to pull out those old T-shirts. The ones that everybody in the Phillies clubhouse was wearing a couple years ago. The ones that had a simple, two-word declaration printed on the front:

The Phillies took a big a step toward regaining the momentum they went into last season with when the news broke Wednesday that they’d signed free agent righthander Zack Wheeler to a 5-year, $118 million contract.

But why stop there?

It was just a year ago when the Phillies didn’t rule out the possibility of signing Bryce Harper and Mike Trout, forming two-thirds of a dream outfield. That didn’t happen because the ink was barely dry on Harper’s record-setting $330 million deal when the Angels re-upped Trout for a staggering $420 million.

Now that they’ve corralled Wheeler, they should continue to pursue the biggest horse in the stable: Righthander Gerrit Cole.

Yeah, it would take a lot of money. But think of it this way. Prior to the 2019 season, owner John Middleton committed around a half a billion-with-a-b dollars to bring in Harper and Andrew McCutchen and J.T. Realmuto and Jean Segura to improve the lineup.

They could give Cole, by far the top pitcher available in this year’s free agent market, a $225 million package — the biggest ever for a pitcher — and still be comfortably under what they spent last season. Not only that, it would give them a team that, on paper, will be as formidable as any team in the division.

Look no further than Nationals Stadium to see what kind of impact this can have. Washington already had Stephen Strasburg five years ago when they signed Max Scherzer to an eye-popping 7-year, $225 million contract. Plenty of people snickered. Scherzer was approaching 30. He was coming off two superlative seasons but his record before that was mixed.

Sounds a lot like Cole’s profile, come to think of it.

In retrospect, the Scherzer signing looks brilliant. He’s finished in the Top 5 of the Young Young balloting every year since and has won it twice. He’s won 79 games with a 2.74 ERA. Most importantly, they’ve been to the playoffs three times and won the first World Series in franchise history in October.

Then, a year ago, they outbid the Phillies and other teams for lefthander Patrick Corbin, in part because they were willing to add an extra year to the deal. It may have seemed like overkill. . .until October when the Nationals won the first World Series in franchise history.

In a way, signing Wheeler makes it easier to negotiate with Cole. He’s represented by Scott Boras, who isn’t afraid to negotiate up until the beginning of spring training and beyond. The Phillies had to guard against the possibility of passing up top-shelf alternatives to chase the best arm available and then coming up empty in February or March.

This allows them to chase the dream of a rotation that includes Cole, Wheeler and Aaron Nola while still secure in knowing that they’ve already greatly improved their starting pitching even if he ultimately decides to go elsewhere.

If nothing else, as a bonus, the Phillies are suddenly a much more attractive destination for any free agent who wants a chance to win.

Surely, there will be some who will argue that Middleton shouldn’t spend himself into payroll inflexibility or warn of the perils of going over the luxury tax threshold. Well, it’s his money. And if he’s made one thing clear it’s that he’s willing to spend it to win. Who are we to tell him not to?

Deep into the postseason.

A case could be made that he’d make a bigger impact on the Phillies than any other club.

The timing couldn’t be better. There’s been a tug of war for the hearts and souls of the region’s sports fans for awhile now and, for the most part, the Eagles have gotten the better of that. Now with the Birds 5-7 and in danger of missing the playoffs just two years after winning the Super Bowl, what better time is there for the Phillies to attempt to reassert themselves?

No team wants to be seen as an easy mark. But this is a baseball world in which Scherzer, David Price (7 years, $217 million) and Zack Greinke (6 years, $206.5 million) are the measuring sticks. The presumption is that Cole will get more. He probably will. But his final number isn’t likely to be off the charts, either.

The Phillies shouldn’t offer a blank check. They should take care not to bid against themselves. And the best part about it is, they don’t have to. They already have Wheeler.

So, if Cole is interested at all, they can be creative. They could offer to frontload the contract. They could include a big signing bonus. They find ways to give him the most money and the highest average annual value while only committing to six years.

And if it turns out he wanted to be in California all along or he really wants to fulfill a childhood fantasy of playing for the Yankees, so be it.

The question isn’t whether the Phillies might eventually regret signing Cole if he’s injured or doesn’t pitch up to expectations.

It’s how much they might regret letting him get away if they have a chance to sign him now.

This article was updated after the Phillies signed Zack Wheeler Wednesday afternoon.