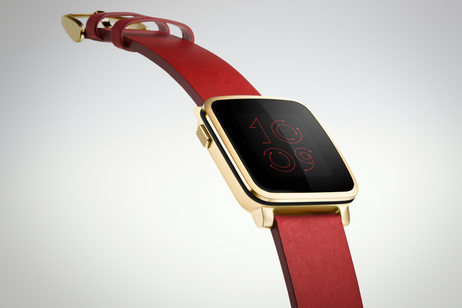 Pebble Time Steel will retail for $299, but is available to early Kickstart backers for $249.

Read More
March is shaping up to be a busy month for the emergence of smartwatches in the world of consumer gadgets.
Next Monday, Apple will host a 'Spring forward' event in San Francisco for its long-awaited Apple Watch, first unveiled last September. A few hints about its key features were teased on Tuesday, but Apple is not alone in its effort to win wrists.
After announcing Pebble Time last week, Kickstarter sensation Pebble has revealed Pebble Time Steel, marketed mainly for professional uses.
CNET provides a brief overview of its main features, which include a color screen and an impressive 10-day battery life.
Apart from the lower price range, Pebble may have another advantage over Apple, at least from the outset, according to The Next Web. Pebble plans to introduce smartstraps, which will take advantage of its charging and data connections to offer extra features to the device via dedicated APIs.
Unlike the first version of the Apple Watch, third-party developers will have the ability to add functionality to Pebble's sensor-equipped watches, providing a wider range of applications than skeptics of smartwatches may have imagined at first blush. Particularly for those on the fence, Pebble's compatibility with both iOS and Android won't require switching to the iPhone to make the most of a smartwatch.
While Apple will hold the stage next week, Pebble has positioned itself as a top competitor in an area still generally untested in the market. Now it's Tim Cook's turn to grab us by the wrist.