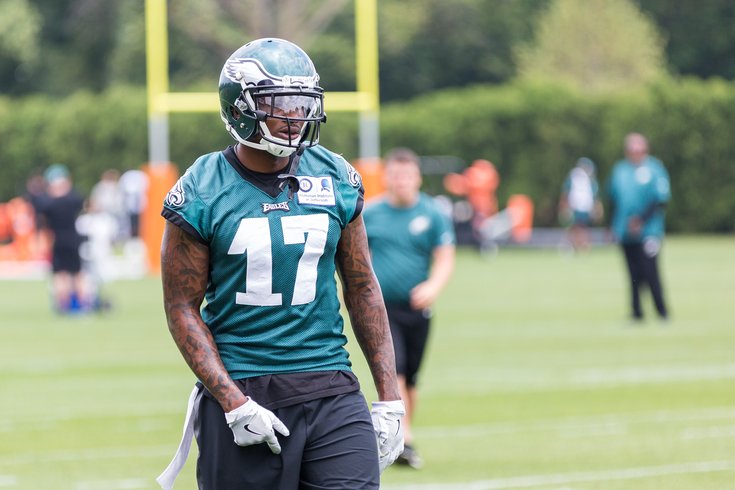 He didn't give many answers, but the one player that reporters kept coming back to was wideout Alshon Jeffery, who signed a one-year deal with the Eagles this offseason. The former Bears Pro Bowler hasn't practiced in almost a week after suffering a shoulder injury last weekend.

"Initially, it was a strain," Pederson said Friday. "And then [we've been] just giving him extra rest on the shoulder."

And while that's afforded some younger players fighting to make this roster a chance to show their worth, the information given out on Jeffery's injured shoulder – and, more importantly, when he'll be ready to return – hasn't been very revealing.

With an off day on Saturday, the Birds will likely have three practices (and a walkthrough) between now and when they kickoff in Green Bay on Thursday night. And it's starting to sound like Jeffery, the team's prize free-agent acquisition, may not be ready to face his former division rival.

"As of now, I can't tell you because I haven't set the rosters yet," Pederson said when asked if he had a plan on how much Jeffery was going to play against the Packers.

Right now, he's listed as day-to-day, but if Jeffery isn't back out there for the team's open practice at The Linc on Sunday, it will have been a week since the 27-year-old has been on the field. Jeffery first injured his shoulder in last Saturday's practice, but was back out there on Sunday.

That, however, was the last we've seen of him.

"That's all right. That's all right. I mean, listen, I gave him a day [off] today," Pederson said Friday. "He's got a day off tomorrow, and the more I can just give him rest – that's the same thing I did with Chris [Long] today. Just a vet day and time to rest up. We're not playing games for a while, games that matter anyway, and we’re getting ready for Washington."

Pederson feels comfortable giving Jeffery that rest because he's a veteran and Thursday night's preseason opener is nothing compared to the one that comes a month later against the Redskins.

That's why despite his belief that Jeffery's injury is behind him, the focus remains on the regular season.

"It's just a matter of keeping him rested," Pederson said. "And again, it's – we're not playing a game. So I've seen a lot from him, probably more so than what you guys have seen, and I'm comfortable with where he's at with our offense. I'm going to make sure he's healthy going into the season."

That sure makes it seem like he's not quite 100 percent. If he can get there by Thursday, will the coach play him against the Packers? Or opt to go the safe route and rest him?

"I haven't decided that yet," he said.