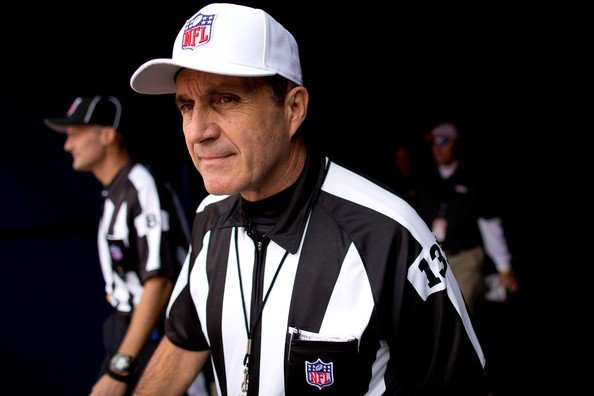 Sure, the Eagles pulled out an upset 28-23 win on the road against the Carolina Panthers, improved to 5-1 and jumped to the top spot in the NFC Thursday night.

But Birds fans still have a bone to pick with Pete Morelli and his officiating crew.

After all, the Eagles landed on the wrong side of the first game in NFL history in which one team compiled more than 120 penalty yards in a game, while the other finished with less than 10, NBC Sports Philly noted.

The Eagles were whistled for 10 penalties for 126 yards. Carolina's total? That would be one penalty for one yard.

The disparity even inspired an online petition that calls on NFL Commissioner Roger Goodell to ban Morelli from calling Eagles games. The petition, which had collected more than 14,000 signatures as of Saturday afternoon, argues that Thursday night's clash was not an isolated incident.

"NFL Referee Pete Morelli has a clear and statistically obvious bias against the Philadelphia Eagles," the petition states of Morelli, who has 20 years of NFL officiating under his belt.

Preventing Morelli's crew from officiating Eagles games will result in a more trustworthy and honest NFL, the petition reads.

"This will benefit the entire league and keep all claims of conspiracy to a normal level," it states.

As we pointed out after the game, Eagles fans weren't alone in questioning the officiating throughout, with local and even national analysts chiming in.

The nationally televised broadcast on CBS regularly displayed a graphic comparing the penalty numbers between the two teams in the second half, particularly as the Eagles' flags allowed Carolina to get within striking distance late.

Coach Doug Pederson and his staff planned to select certain plays from the game and submit them to the NFL for review, as every team does every week, Pederson said in a press conference Friday.

"Every week our protocol is to go through and watch the game," he said. "We look at the game, and whether it was a call against us or maybe a call that wasn't made that we felt should've been made, we send those in."

But Pederson trod carefully around the Eagles' recent history with Morelli's crew, including a road loss to the Detroit Lions last year in which the Eagles were called for 14 penalties to the Lions' two.

Pederson said he believed the league was aware of the disparity when he was asked about it Friday, but he declined the chance to weigh in.

"I'm not going to get into all that," he said. A lot of the flags [Thursday night] were legit calls. We've got to do a better job there. For whatever reason, it is what it is. Moving forward, we can't worry about it. Bottom line, we won the game."

Whether it's to sign the petition, to share it or to just get a good laugh out of it, all of that can be done by seeing it here.