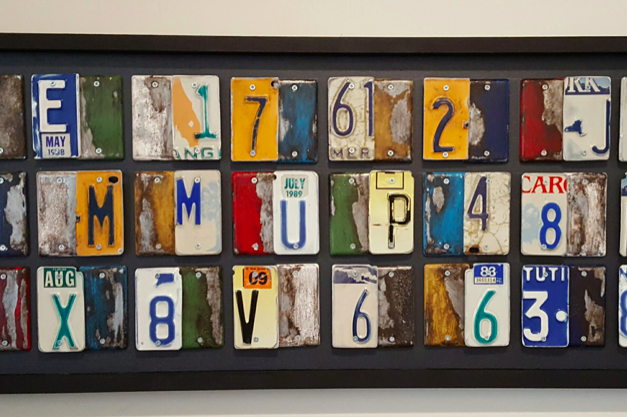 The FBI's Art Crime Team is investigating the theft of a $1,600 work of from Penn Medicine's Perelman Center for Advanced Medicine.

Authorities said the incident occurred April 4 at the building at 3400 Civic Center Blvd., where artist Tim Barton's "34 Years in the Making" had been hanging for the past seven months.

Barton, who served in the U.S. Navy, created the collection of license plates documenting his travels across the country.

A Penn security officer called Barton on April 11 to ask him whether he had come to remove the artwork. Security cameras showed that an unidentified male suspect took the piece off the wall, left the building and was seen in surveillance footage boarding a SEPTA Regional Rail train at the University City stop, according to The Daily Pennsylvanian.

"It was absolutely not believable. I couldn't understand why anyone one would do it because it's not like I'm a super well-known artist or anything," Barton told FOX29. "So why would they risk stealing something?"

Barton gave police the names of six people who expressed previous interest in buying the piece, which had his email address on the display. Those individuals declined to purchase the artwork at the time of their interest because of its price.

Police described the suspect as dressed in black carrying a black backpack with white lettering on it. The investigation remains active and ongoing.