Lawmakers have been unable to establish rules for the new session, preventing legislation from passage. Rozzi is conducting a statewide listening tour in search of help 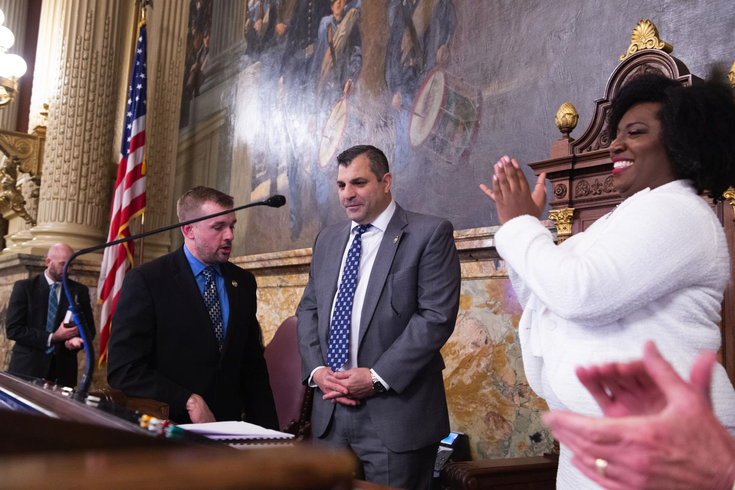 Pennsylvania House Speaker Mark Rozzi, of Berks County, is embarking on a statewide listening tour to get public feedback on how to solve the chamber's partisan gridlock, which is preventing the passage of legislation.

The Pennsylvania House of Representatives is at an impasse, with lawmakers unable to establish rules for the new legislative session. The standoff has delayed the passage of a constitutional amendment that would allow child sex abuse victims to file lawsuits that otherwise would be prevented by the statute of limitations.

In an effort to solve the partisan gridlock, House Speaker Mark Rozzi is embarking on a statewide listening tour to gain public feedback on the best ways to overcome it.

The listening tour kicks off Wednesday in Pittsburgh, with more stops to be announced over the next few days. Rozzi, who represents Berks County, has asked a bipartisan group of six legislators to join him. They include Reps. Morgan Cephas, a Democrat from Philadelphia, and Tim Briggs, a Democrat from Montgomery County. The group has been meeting since Jan. 17 as the Democratic-controlled House searches for ways to end its gridlock.

"As a rank-and-file member of the House for 10 years, I was never involved in the behind-the-scenes politics of the General Assembly," Rozzi said Friday. "Now, having been thrust into it over the last two weeks, I can tell you one thing: Harrisburg is broken."

Rozzi was elected as the state's first independent House Speaker on Jan. 3 after being nominated by Rep. Jim Gregory, a Republican from Blair County. The longtime Democrat appeared poised to change his party affiliation and has repeatedly said he will not caucus with either party.

Still, Gregory has called on Rozzi to resign, claiming that he's privately walked back his decision to switch his party affiliation. Some Republicans also have made calls for Rozzi's resignation.

The first few weeks of a new legislative session typically consist of establishing rules and assigning members to chair legislative committees. However, former Gov. Tom Wolf called for a special session of the state House and Senate on Jan. 9 in order to pass the constitutional amendment, which would establish a two-year window for abuse victims to sue abusers otherwise protected by the statute of limitations.

The amendment needs to be approved by both legislative chambers and signed by Gov. Josh Shapiro before it can appear as a ballot referendum. Lawmakers from both parties had pledged to approve it at the beginning of this session.

The Republican-controlled Senate passed it as part of a package of constitutional amendments, including some that lack bipartisan support. They included measures that would require voters to show identification at the polls, mandate post-election audits and give lawmakers greater power to disapprove of regulations implemented by the governor,

The Senate since has recessed until Feb. 27.

"During my short tenure as speaker, I have seen the highs of former Gov. Tom Wolf call the General Assembly into special session to pass a constitutional amendment that would provide relief to survivors of childhood sexual assault," Rozzi said. "I have also seen the lows of lawmakers using survivors of sexual assault as pawns to try to force the passage of another constitutional amendment that would make it harder for everyone to vote."

The House Republican Policy Committee is set to meet Monday to discuss the importance of returning to the chamber to pass the package of amendments. If the amendments are approved by the House before Jan. 27, they would appear on the ballot during May's primary election.

It is unclear whether the state House will reconvene before three special elections scheduled for Feb. 7. The elections, which all take place in Allegheny County, will fill vacancies left by the death of former Rep. Anthony DeLuca and vacancies created by Lt. Gov. Austin Davis and Congresswoman Summer Lee taking on their new roles.