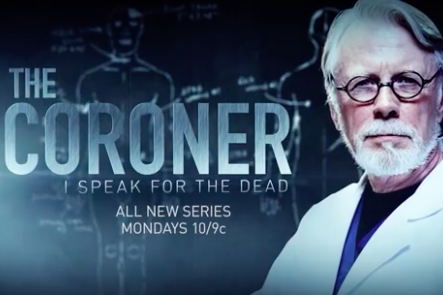 "The Coroner: I Speak for the Dead" airs Monday nights at 10/9c on Investigation Discovery.

Devoted fans of the forensic crime drama genre are in for a compelling new television series that will center on the career insights of longstanding Dauphin County Coroner Graham Hetrick.

On Monday night, Investigation Discovery premiered "The Coroner: I Speak for the Dead," a headlong examination of the work that goes into complex forensic investigations.

“They say everybody has a story to tell—but Graham Hetrick knows well that every body has a story, and it’s simply his job to listen,” said Henry Schleiff, Group President of Investigation Discovery, American Heroes Channel and Destination America. “In this fascinating foray into forensics, 'The Coroner: I Speak for the Dead' showcases a critical element to resolving homicides: the role of a coroner."

An advance screening on Sunday night at Harrisburg's Spring Gate Vineyard, attended by Hetrick, gave about 500 people a sneak preview of the first of eight episodes in Season One, according to Penn Live. Those in attendance gave it a big thumbs up.

Hetrick, who grew up above his father's funeral home, has been the coroner in Dauphin County since 1990. Over the years, he's been involved in hundreds of homicide investigations that rely on his expertise in blood pattern analysis, crime scene management, forensic sculpting, and shallow grave recovery. He's also a grief counselor, a funeral director at his father's old business, and an adjunct professor at the Harrisburg University of Science and Technology.

"A natural-born storyteller and a bonafide mystery-solver, Hetrick has helped bring peace to the families of slain loved ones in search of answers, as well as to ensure that justice is, indeed, served," Schleiff continued.

Each episode of Hetrick's series will feature a homicide case pulled directly from his own personal files, which extend beyond Dauphin County. At every turn, he'll walk viewers through the steps of the investigation and reveal how the murders took place.

The first episode delves into the story of a Harrisburg mother who was beaten and to death in her tough neighborhood.

"Investigators aren’t lacking for suspects—but Hetrick sees signs of a crime of passion and believes Iris’ killer could be hiding in plain sight," the synopsis reads.

You can check out a full list of upcoming episodes here.