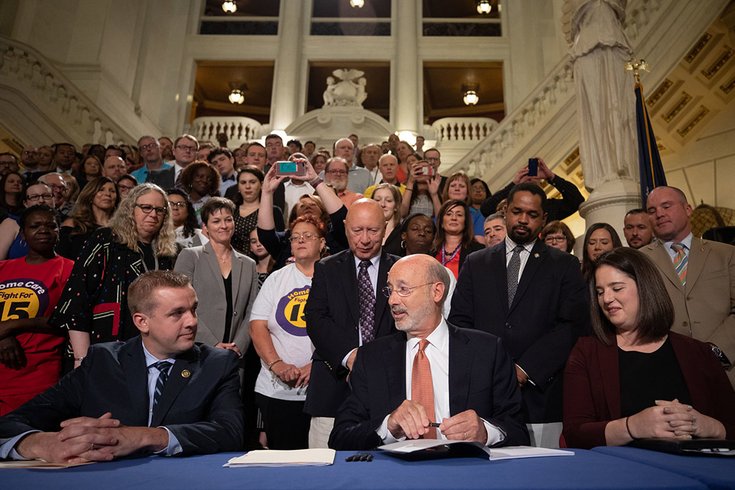 Pennsylvania Gov. Tom Wolf signs House Bill 3 into law at the Capitol rotunda in Harrisburg on Tuesday. The health reform measure creates an online exchange operated by the state in lieu of the federal government.

Pennsylvania will soon get its own state-based exchange to make it easier for residents to buy affordable health insurance.

On Tuesday, Gov. Tom Wolf signed legislation approved last week by the state Legislature to replace HealthCare.gov, the federal website selling health care policies that comply with the Affordable Care Act. Wolf said the 400,000 Pennsylvanians who buy insurance in the marketplace would save on health premiums – by as much as 10 percent – with greater access to affordable insurance.

If the exchange and reinsurance fund are approved by the U.S. Health and Human Services Department, residents could begin enrolling in plans in about 18 months.

MORE HEALTH: Endurance athletes have the heart to compete on the big stage

“This bill is a huge step toward making health insurance affordable and effective for all Pennsylvanians,” Wolf said. “It’s pretty rare for a program to come along where everyone pays less, but that’s exactly what this does. And I’m so proud of my colleagues for recognizing this as a priority and moving it along quickly. I want Pennsylvania to be a leader on health care reform, and I want no Pennsylvanian worrying about affording the care they or their loved ones need.”

According to the Wolf Administration, the state will use a federal waiver to create a reinsurance fund to pay some health care costs for high-cost individuals, which "will lower premiums for other insured Pennsylvanians on the individual market as well as reduce the approximately $2 billion cost for health care premium subsidies to assist low-income individuals."

Savings from the decreased operational costs of the new exchange and these federal savings will be used to create the reinsurance fund and save Pennsylvania consumers up to $250 million in annual premiums.

A state that runs its own exchange gives it more control over it, health care policy analysts say. For example, a state that operates its own exchange can keep automatic re-enrollment, even if the Trump administration ends it in Healthcare.gov policies, thus making it more cumbersome for someone to maintain their policy from year-to-year.