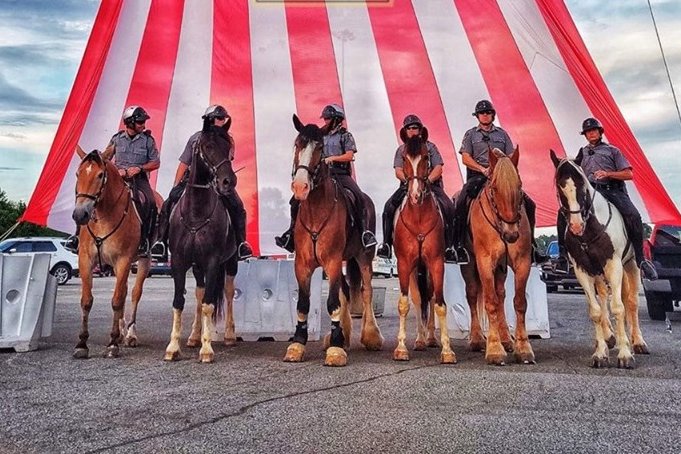 The Pennsylvania State Police is asking the public to donate horses to its mounted patrol unit, which uses horses in searches and security situations across the state.

The Pennsylvania State Police are looking for new recruits, a process familiar to plenty of municipal and state police departments across the country. The Pennsylvania State Police's search, however, is unique: The police force is trying to fill out its mounted patrol unit, which ride horses, so police asked the public in a Facebook post Tuesday to donate some horses.

The police force has a stable at the Pennsylvania State Police Academy in Hershey, and it appears the stable count is running a bit low. Police, according to the post, are hoping the horse donations will fill out a group of 28 horses.

Police horses are used statewide during searches, for crowd control, for security, and during patrol of remote parts of Pennsylvania.

Before every equestrian in Philadelphia with a crowded stables reaches out, however, there are some requirements. Not just any horse is eligible for the mounted patrol unit.

Eligible horses must be geldings, meaning they've been castrated and therefore can't breed. The horses also have to be at least five years old, and no older than 15 years old. They have to be at least 16 hands tall -- which, police helpfully explained in the Facebook post, equates to five feet, four inches at the shoulder -- and no taller than 18 hands, or six feet. Draft breeds, such as Clydesdales and draft-cross breeds are preferred, but police say thoroughbreds and similar breeds are less desirable.

If a donated horse is deemed fit for duty, the horse will be accepted on a 120-day trial to determine if it's a good fit, according to police.

The good news, if you're thinking about donating a horse, is that you might eventually get your equine friend back. When police horses are retired, the post says the state police first reaches out to the original owner and offers to return the horse.

If you have a horse that fits the bill, and you're willing to part with your animal pal, you can contact Corporal Carrie Neidigh, whose last name is suspiciously similar to the horse onomatopoeia "neigh", at 717-533-3463.