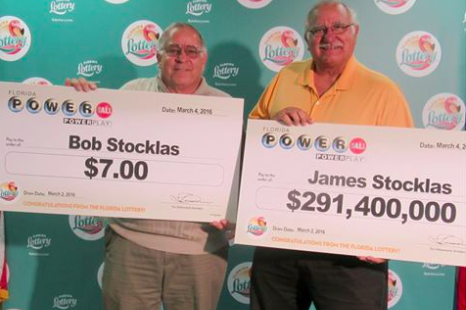 Returning from a vacation is almost always an unpleasant reality check: laundry, work, an empty refrigerator, a few extra pounds. Even if it's nice to be back, it's pretty tough to resume business as usual. Not so for a Pennsylvania state magistrate who, after wrapping up his annual monthlong trip to Florida with a couple of friends, discovered he's now a multimillionaire.

Bethlehem Senior District Judge James Stocklas went straight to bed after parking his RV in his driveway late Thursday night, according to The Morning Call. Bright and early the next day, when he visited his favorite diner for breakfast, he decided to take a gander online – just in case, out of curiosity – to find out who won Florida's massive $291 million Powerball jackpot. While he was away, he had purchased a bag of ice and $10 in tickets to share with his friends.

Right on the spot, Stocklas' life changed forever. Only one winning ticket – his – had been purchased in the Florida town where he spent his vacation. He told The Morning Call he was floored by the discovery.

"I was yelling and I bought everyone in the diner breakfast," Stocklas said. "When I found out, I was shaking for an hour straight."

After taxes, Stocklas and his two friends, pool business owner Barry Bartakovits and an unidentified local woman, will walk away with a cool $40 million apiece. Naturally, they decided to collect their winnings in style: a private jet to Tallahassee at $3,000 an hour and several bottles of champagne.

Stocklas, who serves in Northampton County, said he plans to return to the bench in April and will use the winnings for family trust funds and charitable causes.