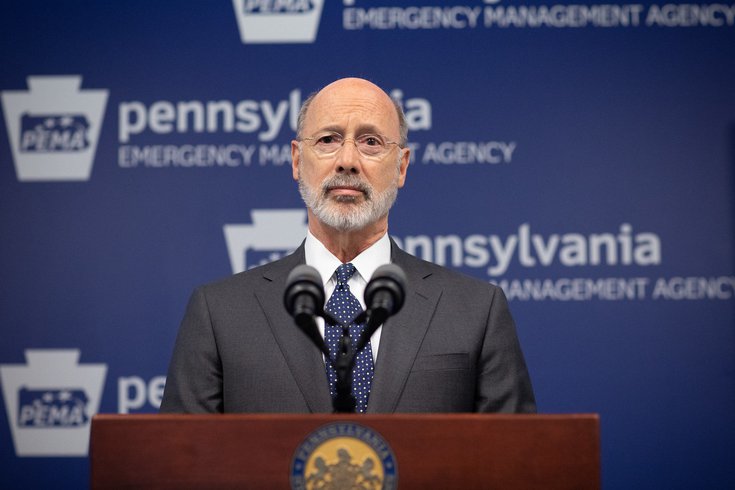 Republican officials from seven counties, including Lancaster, say they will ignore Gov. Tom Wolf's stay-at-home restrictions if he does not advance them to the yellow stage of his reopening plan on Friday.

Wolf, a Democrat, pledged to halt discretionary funding to counties that "put us all at risk by illegally operating." He also said he would restrict CARES Act funding to the counties that adhere to his executive orders.

Seven counties, including Lancaster County, are demanding Wolf move them into the yellow phase of his reopening plan, when restrictions are first eased. Otherwise, Republican officials said they will do so themselves.

Their defiant pledge drew the attention of President Donald Trump, who tweeted his support Monday.

"The great people of Pennsylvania want their freedom now, and they are fully aware of what that entails," he wrote, adding, "Be safe, move quickly!"

The great people of Pennsylvania want their freedom now, and they are fully aware of what that entails. The Democrats are moving slowly, all over the USA, for political purposes. They would wait until November 3rd if it were up to them. Don’t play politics. Be safe, move quickly!

"It's aimed at keeping people as safe as we possibly can in these uncharted waters, and I think that's the responsible thing to do," he added. "The irresponsible thing to do is to just willy-nilly, go off and pretend that we can wave a magic wand and go back into business and suspend the reality of the virus around us."

Wolf warned that businesses that ignore his executive orders potentially could lose their health department certificate, liquor license or certificate of occupancy. Employees of businesses that reopen illegally can stay home and continue collecting unemployment, he added.

Over the weekend, 13 Republican officials from Lancaster County sent Wolf a letter, urging him to advance the county to the yellow phase on Friday. But the officials said they will "move forward with a plan to restore Lancaster County" regardless of his cooperation.

The letter, sent Saturday, was signed by County Commissioners Josh Parsons and Ray D'Agostino, the two Republicans on the three-person board, and U.S. Rep. Lloyd Smucker, among other elected officials.

“As you have stated numerous times, one of the key goals of the stay-at-home effort was to ensure our hospitals and health care systems were not overwhelmed by COVID-19 patients," the letter said. "We can now report that this goal has been met and our hospitals have the capacity to handle the needs of our communities.”

Wolf extended his stay-at-home order to June 4, excluding 24 counties that began reopening last Friday. Another 13 counties – all in Southwestern Pennsylvania – are slated to advance to the yellow stage this Friday.

Advancing to the yellow phases enables non-life sustaining businesses to reopen. In-person retail sales are permitted, though curbside pickup and delivery services are still preferred. But restaurants and bars are still limited to takeout and delivery options, and gatherings are restricted to less than 25 people. Visitation restrictions also remain in place at longterm care facilities and prisons.

Republican elected officials from Berks, Cumberland, Dauphin, Franklin, Lebanon and Schuylkill counties also sent letters asking Wolf to approve their request to enter into the second phase of his plan.

The incidence rate for all seven counties remains higher than 50 new cases per 100,000 people — the target goal for entering into the yellow phase.

“Before we can reasonably consider moving from red to yellow, we must have, at a minimum, countywide rapid response contact tracing and increased testing in place," Lehman told Lancaster Online. "Without that, any call to reopen is arbitrary and has no public health basis. True economic recovery will be dependent upon public confidence in having established the necessary public health tools. Until those tools are in place, we risk doing more harm than good.”

Lancaster County's Republican officials said they will continue working with health care professionals and industry representatives “to stay in tune with the needs of our communities and be able to identify and swiftly respond to increased numbers in the event of a resurgence."

They outlined a four-pronged plan to ensure safety within nursing homes and longterm care facilities, which have accounted for more than 90% of the counties coronavirus-related deaths. The county also has hired a public health emergency advisor to provide technical, administrative and logistical advice.