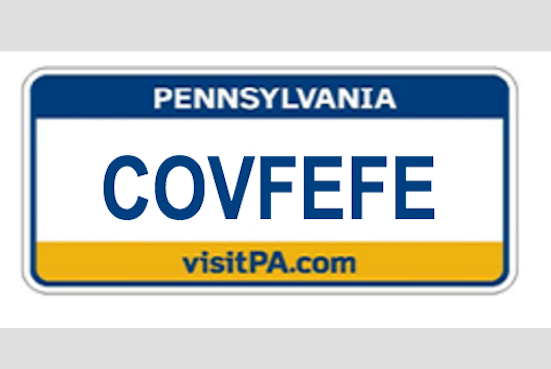 A deleted tweet will go on to live forever in Pennsylvania.

One driver in the Keystone State has officially scooped up the "COVFEFE" license plate after motorists in states across the country raced to memorialize President Donald Trump's typo turned meme late last month.

Drivers in at least 21 states – from Texas to Nebraska – put in the paperwork to register for the vanity plate as of June 4, but the opportunity remained wide open in Pennsylvania until last week.

Craig Yetter, spokesperson for the Pennsylvania Department of Transportation, confirmed Friday evening that "paperwork requesting the license plate configuration COVFEFE was processed recently," though Yetter was unable to disclose what day the paperwork was processed or what county the driver lives in due to privacy laws.

The configuration was available for registration on the department's website as of Thursday but changed to "reserved" on Friday afternoon.

Shortly after midnight on May 31, Trump posted the incomplete phrase, "Despite the constant negative press covfefe," which was deleted hours later.

Trump posted a follow-up tweet that read, "Who can figure out the true meaning of 'covfefe' ??? Enjoy!" which even became the butt of the joke for the Philadelphia Police Department.

Roads are still slick from last night's rain. Please use your wipers and drive with covfefe

White House Press Secretary Sean Spicer defended the misspelling, saying that Trump and "a small group of people [knew] exactly what he meant."

CNN was first to report that drivers across the country were racing to their respective transportation agencies to claim their state's only "COVFEFE" plate.

At least 21 states filed the proper paperwork to reserve the plate, though not every state has the ability to check availability online, so that number could have been even higher.

The registration could have also happened well before Trump's viral social media post since no time stamp is available to confirm registration, according to CNN.

Feel like the opportunity slipped away? "COVF3F3," "C0VFEFE" and "C0VF3F3" are all still up for grabs.