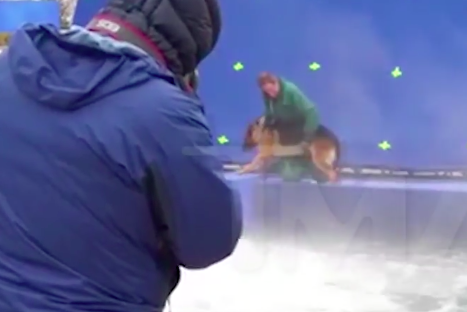 TMZ leaked a video of a troubling scene from the set of "A Dog's Purpose," prompting outrage from animal rights activists.

People for the Ethical Treatment of Animals (PETA) is outraged over a leaked video from the set of "A Dog's Purpose," an upcoming feature film adaptation that traces a dog's life with his family up to his eventual reincarnation.

RELATED ARTICLES: What should you do if you witness animal abuse? | Dog destined for dinner plate in Thailand to get new start in N.J. | George Bengal, Pennsylvania SPCA Director of Humane Law Enforcement, dies at 69 | Dog found crammed in trash bag at Wissahickon Valley Park | Woman lashes out on Facebook against man who ditched heartbroken dog

Video from the scene, filmed near Winnipeg, Canada, was obtained by gossip site TMZ and published Wednesday. It depicts a German shepherd being forcibly shoved into a pool with turbulent waters artificially churned by a series of outboard motors, with the intended effect of a frothing river.

The dog in the video, one of at least five used on the set, visibly resists a trainer's attempt to shove him into the water until he is overcome and submerged. One crew member narrates the scene, apparently unaffected by the dog's obvious distress.

Produced by Amblin Partners and Universal Pictures, "A Dog's Purpose" is slated for a theatrical release on January 27. The cast is led by Britt Robertson, Dennis Quaid, KJ Apa, Josh Gad, Peggy Lipton and Juliet Rylance. Below is a trailer for the film, which is based on the 2010 novel by W. Bruce Cameron.

In response to the video, PETA released a statement condemning the film's treatment of the dog. The organization suggests that this scene is indicative of wider practices carried out by the entertainment industry, specifically by Birds & Animals Unlimited (BAU), the company that supplied the dogs and has been contracted for major films including "The Hangover," "Marley and Me," "Game of Thrones," and "Pirates of the Caribbean."

The apparent on-set incident, which is hard to watch, may come as an unwelcome surprise to unsuspecting moviegoers who care about dogs—especially given the title of the film, based on the hit book of the same name. But to those who know the chronic neglect uncovered at a facility operated by Birds & Animals Unlimited (BAU) ... this incident is just another drop in a very saddening bucket.

PETA has called on supporters to boycott "A Dog's Purpose" and all other films that use live animals.

According to TMZ, director Lasse Hallström was present on set throughout the scene, which was eventually brought to a halt when somebody shouted "Cut it!" and handlers rushed to the animal's aid. At least one crew member was reportedly disturbed by what transpired.

"Fostering a safe environment and ensuring the ethical treatment of our animal actors was of the utmost importance to those involved in making this film and we will look into the circumstances surrounding this video."