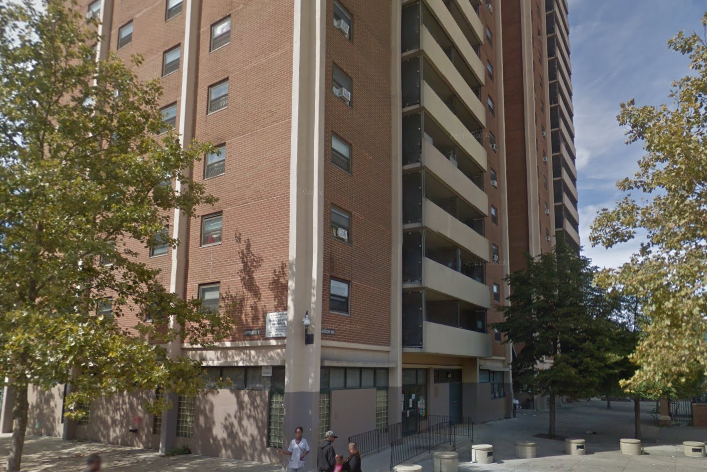 The Norman Blumberg homes at 2300 Jefferson Street, built in 1969, will be demolished as part of a multiphase PHA redevelopment plan in Sharswood.

Following a City Council vote on June 18, the Philadelphia Housing Authority received a green light to take ownership of 1,300 properties in the blighted neighborhood of Sharswood, located north of downtown, for the purpose of revitalizing the area and establishing a new PHA headquarters.

The PHA will confiscate the properties primarily by way of eminent domain, according to Forbes, as part of a multiphase, $500 million dollar project that including housing, retail and the new PHA headquarters. The focal point of the redevelopment will be the demolition of the Blumberg apartments, to be replaced with 1,200 units, the majority affordable rentals.

About 500 of the properties to be seized are already owned by the city, but 800 more are privately owned. The plan has quickly drawn criticism for its heavy reliance on taxpayer funding in light of the PHA's recent troubles and the reduced property tax revenue the redevelopment will generate. There are also concerns that the plan, which is set to begin with the construction of 57 affordable rental units, will serve to further concentrate poverty while displacing existing businesses for new commercial interests on Ridge Avenue.

One widely-accepted notion amongst planners today is that poverty should be diffused, since this improves the poor’s mainstream social integration. That is why public housing that gets demolished is replaced with mixed-income projects, where typically no more than 30% of units are affordable. But in Sharswood, about two-thirds of the proposed 1,200 units will be affordable, and many will cater to renters. This means that, even after demolishing the Blumberg apartments, the area will have even more poor people.

Adam Lang, a local activist and critic of the PHA plan, recently wrote an open letter about the Sharswood plan, noting that while the neighborhood is undoubtedly in bad shape, the PHA should be held responsible for much of the blight considering its ownership of many of the properties.

If the City wants to transfer their properties to PHA, so be it, but there is no reason why the City shouldn't start auctioning off tax delinquent properties to get them back into private hands. The City definitely shouldn't be seizing property from owners that are paid up to date on their taxes for this.

According to Newsworks, the plan has been welcomed by Mayor Michael Nutter, City Council President Darrell Clarke, and some local residents. In response to critics of the plan, PHA President Kelvin Jeramiah says the agency is attempting to turn a new page on its record as a landlord.