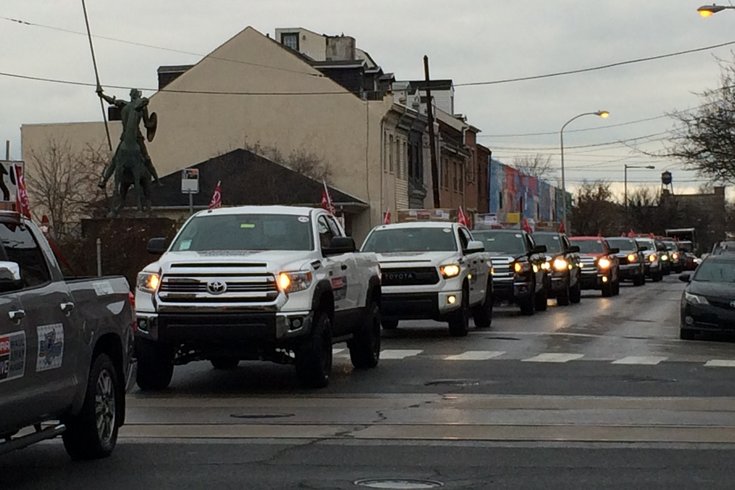 Second Street in Northern Liberties becomes something of a parade on Friday morning, as 78 trucks, filled with some Toyota's donation of 250,000 meals to Philabundance for Philadelphia's hungry, rumble on by for this year's Haul Away Hunger event.

A long procession of pick-up trucks poured through the city on Friday morning, all carrying food for the homeless as part of this year's 9th Annual “Hauling Away Hunger Food Drive.”

According to Stefanie Arck-Baynes, senior manager of communications and public relations for the local non-profit group Philabundance, 78 Tundra trucks moved just some of a total donation of 250,000 meals – all donated by Toyota – to needy individuals throughout the Philadelphia region.

The total donation, Arck-Baynes said, doubles the amount that the food drive brought in last year.

Many tons of food were moved from a warehouse in North Philadelphia, down Columbus Boulevard to Citizens Bank Park, before being loaded into transfer trucks for transport to Philabundance's South Philadelphia warehouse.

This year's donation is "flexible," she said, meaning that much food will be used for the holiday season – these were the meals moved on Friday – and the rest will be used to for meals year-round in 2016.

In this way, she said, the non-profit group can support the hungry in the Philadelphia region in the coming year, and can purchase fruits and vegetables later in the year, when they are needed, so that they don't spoil.

The meals, she said, would soon be shared through 250 agencies that support the homeless and hungry throughout the Philadelphia region, which includes nine counties – five in southeastern Pennsylvania and four in New Jersey.