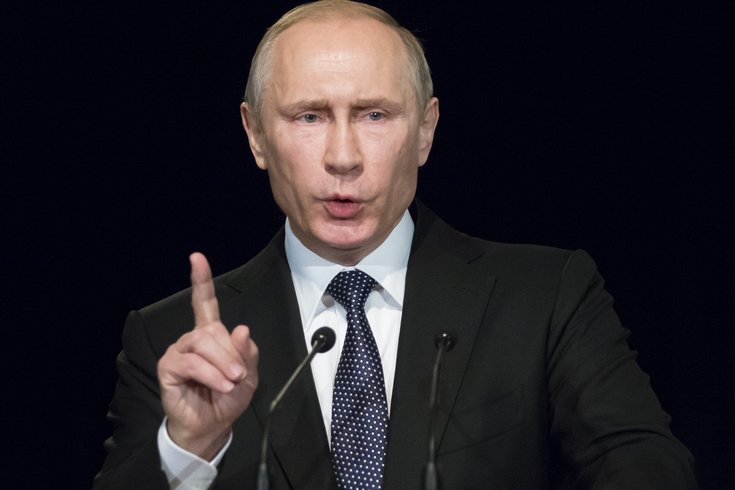 In this file photo taken on Wednesday, June 29, 2016, Russian President Vladimir Putin gestures as he addresses students during his visit to a German Embassy school in Moscow, Russia. He received a vote from a Philadelphia supporter in November's presidential election.

President Donald Trump fired up his Twitter account Sunday to say that, during his meeting with Russian President Vladimir Putin, the creation of a joint cybersecurity task force was discussed. Trump’s social media post comes in the midst of speculation over Russia’s possible role in compromising the U.S. election and breaking news of Trump’s son meeting with a Russian lawyer during the 2016 campaign with the promise of damaging information about Hillary Clinton.

The “impenetrable Cyber Security unit,” as Trump described it, would prevent hacking and other cybersecurity attacks. Trump later posted, “The fact that President Putin and I discussed a Cyber Security unit doesn’t mean I think it can happen.”

The announcement drew criticism from political leaders from the left and the right who doubt Russia's innocence in the U.S. election. Politico reported that cyber officials from the George W. Bush and Barack Obama presidencies also doubted that such a task force could help secure future U.S. elections.

U.S. Rep. Brendan Boyle, D-Pa., from Philadelphia, said after returning Saturday from the G-20 Summit that he would offer legislation that would prevent Trump’s proposal. The legislation would “make sure, in absolutely no shape or form, we spend taxpayer money on this crazy and dangerous idea,” Boyle said in a statement.

“Hiring Mr. Putin to protect our electoral process is like a group of homeowners hiring a security guard to protect them after that individual has broken into their homes.”