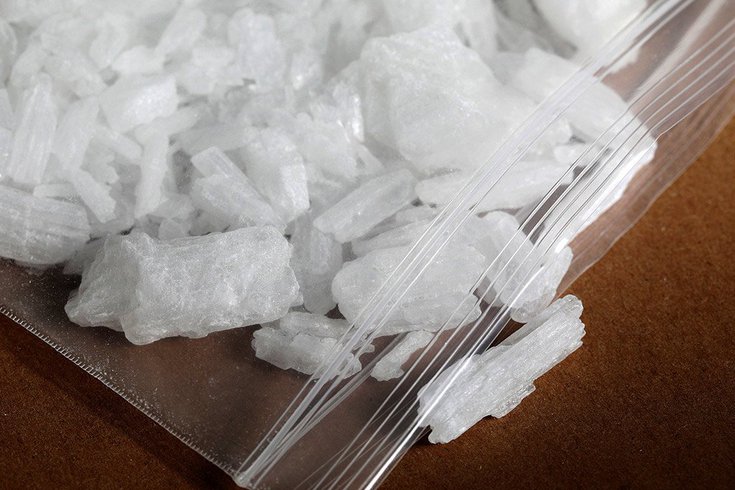 Vontez Scales, of Philadelphia, was sentenced to more than 26 years in prison for his role as a leader of the 'Skipworth' drug ring that had operated in Philadelphia, Bucks, Berks, and Delaware counties. Pictured above is a stock image of crystal meth.

A Philadelphia man was sentenced to more than 26 years in federal prison for his role in a large-scale drug trafficking ring that had operated in Bucks, Delaware, Philadelphia and Berks counties.

Vontez Scales, 29, was found guilty in December of narcotics charges connected to the "Skipworth" drug trafficking operation, which sold crystal meth, fentanyl, heroin, and cocaine. In 2018, Bucks County detectives and Drug Enforcement Administration members found Scales to have a leadership role in the Skipworth gang.

The group is named for its main leader Damir Skipworth, and among the other high-ranking members charged were Jarrett Cobbe and Tyrone Smith. All have pleaded guilty to federal drug trafficking charges. Skipworth was sentenced to more than eight years in prison, Cobb more than five years, and Smith more than three years, U.S. Attorney's Office for the Eastern District of Pennsylvania said Tuesday when announcing Scales sentence.

Scales was convicted of intent to distribute and conspiracy to distribute heroin and methamphetamine. Scales also sold large quantities of heroin laced with fentanyl, a powerful synthetic opioid that is often linked to overdoses and deaths.

He has been convicted of drug distribution charges and sentenced to prison two previous times.

Scales' sentence totaled of 320 months in prison followed by 10 years of supervised release and included a $4,000 fine, according to the U.S. Attorney's Office's press released.

"Scales and his co-conspirators pumped huge quantities of deadly, addictive drugs into Philadelphia and its suburbs," U.S. Attorney William McSwain said. "Drug trafficking is an extremely dangerous business for those engaged in it and for everyone else around them."