Heavy rains were forecasted to continue throughout the evening 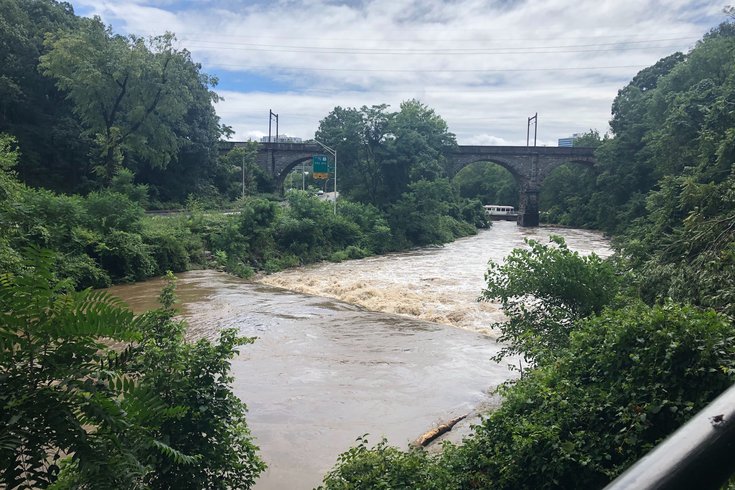 Tropical Storm Isaias has brought significant flooding to the Philly region, including here where the Wissahickon Creek meets with the Schuylkill River.

Tropical Storm Isaias arrived in the Philadelphia region Tuesday with an impressive show of force.

Torrential rains and strong winds have resulted in flash floods and power outages throughout Southeastern Pennsylvania and South Jersey. Tornados have been spotted in several locations too.

Tropical storm conditions were forecasted to continue until Tuesday evening, as some showers were anticipated late into the night. The rain was expected to subside by early Wednesday morning.

The forecast called for as much as six inches of rain throughout on Tuesday, according to the National Weather Service. The heaviest rain was expected along the I-95 corridor. Wind gusts were expected to reach as high as 73 mph.

A coastal flood advisory was in effect until 8 p.m., with up to six inches of flooding expected in low-lying areas along the Jersey Shore and tidal waterways. The warning included the Delaware River, from the Delaware Bay to the Commodore Barry Bridge area.

Storm surge flooding of 1 to 3 feet was expected throughout the region and could lead to road closures.

The impact of the storm forced both SEPTA and NJ Transit to modify or suspended services. PennDOT also implemented speed limit restrictions on roadways across the region.

Flooding across Philly forced the city to close down several roads, including Kelly Drive between the Art Museum and Falls Bridge. Cobbs Creek Parkway between 70th Street and Baltimore Avenue.

Philly police and fire personnel helped rescue drivers stranded in flooded streets. A flood warning for the Schuylkill River is in effect until Wednesday night or whenever the warning is cancelled.

.@PhillyFireDept members are currently performing multiple water rescues across the city; PLEASE if you can’t see the road #TurnAroundDontDrown! (And of course...stay away from the water!) pic.twitter.com/igwmMzCFBS

New Jersey has been in a state of emergency for the duration of Tuesday's storm.

Isaias has brought widespread power outages across the Philly region. More than 583,000 customers are without power, according to outage maps provided by PECO, PSE&G and Atlantic City Electric.

Restoration of power is unclear at this point. All three service providers are still assessing the current situation with the storm, but some residents could be without power for several days.

Tornado spotted along the Jersey Shore

A tornado was spotted nearby Ocean City, Strathmere, and Marmora in Cape May County on Tuesday as a result of Tropical Storm Isaias.

There was a tornado warning off shore and caught it on Local Cam in Strathmere NJ!! #StormHour #ThePhotoHour pic.twitter.com/LMXtromWAF

Widespread flooding across the region

PFD, @PhilaOEM and many other partners are responding to flooding in Eastwick. Updates to come. pic.twitter.com/sZRcokdltq

If you can’t see the ground, turn around, flooding from Crum Creek on Chester Pike in Delaware County @KYWNewsradio pic.twitter.com/SGtH8IJcAe

Below is a video from Montgomery County 👇 pic.twitter.com/BqWSTEP6nq

Flooding and without power in Bucks County. pic.twitter.com/8Ps9MhtzXb

Flooding from #Isiais at Gladwyne exit off I-76 in Philadelphia @KYWNewsradio @6abc @NBCPhiladelphia @BreakingNews pic.twitter.com/WMpaljAqXn

Starting to see some flooding now toward the bay in Ocean City. Looks like most if not all the side streets between West Ave and the water are being blocked off #Isaias @KYWNewsradio pic.twitter.com/V1IsRli2cx

Flooding along Pennsylvania Ave and north side of ⁦@philamuseum⁩ access road. A quick look at Schuylkill River. #TropicalStormIsaias pic.twitter.com/eJf14fuSyJ

The rain has stopped in Chester County but no power, down trees and cars stuck from flash flooding. pic.twitter.com/0zMzLgPMaM

The Schuylkill River is flooding onto the trail at 2400 Market. View from @KYWNewsradio... pic.twitter.com/cblu4MhbdK

Route 100 in Macungie Pa, pretty decent flooding after 7+ inches of rain locally, went on foot since I couldn’t even drive out of my house. What’s more impressive is the tornado damage in doylestown @stormchaserray got! @TWCAlexWilson @NWS_MountHolly @epawawx @WeatherNation pic.twitter.com/GbWZUIsrsr

9:45 AM versus 1:45 PM. Rain is over but the river hasn’t created yet #Conshohocken #schuylkill pic.twitter.com/As0RIjxLRV

It has gotten really bad in Conshohocken where Ridge Pike is flooding. This is by the Regal movie theater. @KYWNewsradio pic.twitter.com/Z9g4KqTGtW

One area in particular that had severe damage due to Tropical Storm Isaias was Doylestown after a tornado ripped through the Bucks County town on Tuesday.

Possible #tornado in Doylestown. This is the parking lot of Doylestown Hospital. ⁦@KYWNewsradio⁩ pic.twitter.com/hUeFwD4LuS

Aerial view of the damage on Shady Grove Circle in Doylestown PA after an apparent tornado ripped through the area @epawawx @ReedTimmerAccu @JimCantore @spann @StormHour pic.twitter.com/jA15FhyyGd

Pulling cars apart - winds so strong cars were piled on top of each other in parking lot of doylestown hospital as winds begin to kick up again @NBCPhiladelphia pic.twitter.com/oqpVWZlOlF

Big-time damage on Shady Grove circle in Doylestown PA from A tornado that tore through the area @spann @ReedTimmerAccu @JimCantore @epawawx pic.twitter.com/uFmyMMWWTk

#ISAIAS DAMAGE: Here's a look at the SB lanes of the #GardenStateParkway in Cape May County.

@NWS_MountHolly ... Here is some damage from where I believe the tornado came ashore in Northern Strathmere, Atlantic County. It was on Bay Avenue, the road that connects Ocean City and Strathmere. Spotter ID: CDNJ-034 pic.twitter.com/uaLtC8Gp1W

This house in Ocean City got hit hard by the storm. That’s part of the roof on the ground. Some of the upstairs deck too #Isaias @KYWNewsradio pic.twitter.com/83hwfTBfxD

Strong winds from #Isaias brought down a steeple on 32nd and Central Ave. in Ocean City. #6abcaction #NJwx @6abc pic.twitter.com/mgw35DT3hK