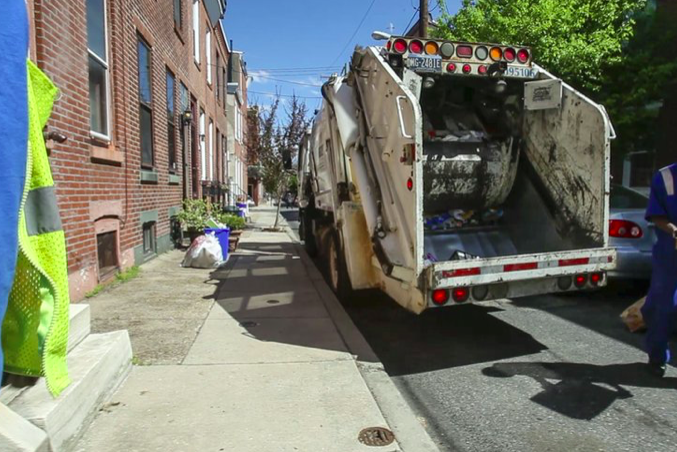 Trash and recycling collection has been backed up in recent weeks across Philly due to increased tonnage, extreme weather and worker shortages caused by COVID-19.

With Tropical Storm Isaias expected to bring heavy rain, flooding and strong winds to the Philadelphia region,  city residents are asked to hold their recycling until next week.

The Streets Department is suspending recycling collection on Wednesday, Thursday and Friday. Trash pickup will continue despite the impending storm. Residents are asked to put their trash out on their normal collection day.

Tropical Storm Isaias is expected to bring significant rainfall to the Philly region beginning Monday night and continuing throughout Tuesday. A flash flood watch will be in effect from 10 p.m. Monday through noon Wednesday. Strong winds are expected at the Jersey Shore.

The Streets Department has focused its resources on trash collection in recent days due to citywide delays. Recycling was suspended last Monday and Tuesday before resuming Wednesday.

Sanitation crews continued to collect trash and recycling over the weekend. More workers have been added on a temporary basis to address the ongoing delays, and city officials hope to resolve the issue within the coming weeks.

The Streets Department resumed regular weekly trash and recycling pickup on July 6, but the department quickly fell behind schedule. Recycling collection previously had been reduced to every other week.

Residential trash tonnage has increased by 25% due to people spending more time at home during the coronavirus pandemic, city officials said last week.

Residents also are permitted to dispose of their trash and recycling at six sanitation convenience centers. The centers are open seven days a week from 6 a.m. to 8 p.m. They have been operating every day for the past two weeks. The locations can be found here.

Residents must show proof of a Philadelphia residence in order to access the sanitation convenience centers.