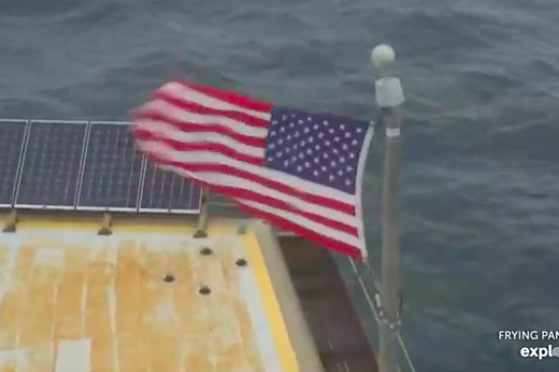 The Eastern Seaboard is bracing for Tropical Storm Isaias after a weekend of heavy rain and flooding in Florida and the Caribbean.

Forecasters at the National Hurricane Center say Isaias could be upgraded to a hurricane again when it makes landfall in the Carolinas on Monday evening. The Frying Pan Ocean Cam, located in the Outer Banks, has live footage from 34 miles off the coast of Cape Fear, North Carolina.

During Hurricane Florence in September 2018, thousands of people watched the live broadcast from Frying Pan Tower, where an American flag was pummeled by 105 mph winds. The flag – which online viewers named Kevin – ultimately was shredded and tattered by the severe conditions. After the storm passed, it was donated to the American Red Cross, which auctioned it for $10,900 to help with relief efforts.

Frying Pan Tower is a former light station run by the U.S. Coast Guard from the 1960s until 2004. It was manned by 20 coast guardsmen, who lived there full-time until 1979. Thousands watched the Frying Pan Tower live on YouTube again in 2019 when the platform was battered by the wind and rain from Hurricane Dorian.

A hurricane warning has been issued for parts of North Carolina and South Carolina as Isaias nears the area. The storm system had sustained winds of 70 mph ahead of its arrival.

"We are forecasting it to become a hurricane before it reaches the coast this evening," NHC senior hurricane specialist Daniel Brown said. "It's forecast to produce a dangerous storm surge of 3 to 5 feet in portions of North and South Carolina."

Two people were killed and extensive damage occurred in the Caribbean over the weekend as Isaias swept through the Dominican Republic, Puerto Rico and the Bahamas. In Florida, beaches and parks were closed as officials adapted shelter policies to account for COVID-19.

Significant rainfall is expected to reach Southeastern Pennsylvania and New Jersey on Monday night and continuing through Tuesday night, forecasters said. Peak gusts could reach as high as 73 mph.

As of the new 2PM advisory, #Isaias is on track to come ashore later this evening near the N/S Carolina border. Tropical storm-force wind gusts are starting to be observed along the SC coast.https://t.co/meemB5uHAR pic.twitter.com/GxsggDtzRp

At the Jersey Shore, wind damage, rip currents and swells are anticipated as Isaias moves north.