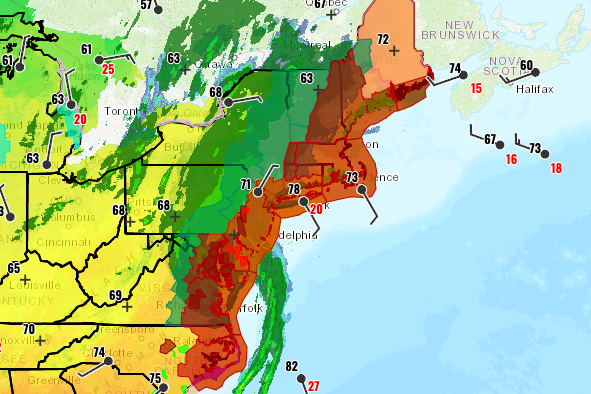 Tropical Storm Isaias is expected to bring heavy rain, flooding and strong winds throughout Southeastern Pennsylvania and South Jersey on Tuesday. Above, a radar image of the storm taken around 9 a.m.

Gov. Phil Murphy declared a state of emergency in New Jersey as Tropical Storm Isaias made its way up the Eastern Seaboard on Tuesday.

The order went into effect at 5 a.m. Heavy rain, flooding and strong winds are expected through Tuesday night.

Residents are encouraged to stay off the roads due to dangerous driving conditions.

All state offices will be closed. Non-essential government employees will not report to work, but essential employees are expected to adhere to their usual schedules.

New Jersey's Emergency Operation Center will remain open for the duration of the storm.

UPDATE: I am declaring a STATEWIDE STATE OF EMERGENCY for Hurricane Isaias effective at 5:00 AM on Tuesday, August 4, 2020:
☑Do not be on the roads unless absolutely necessary
☑If you MUST drive, take it slow, use caution, and leave extra time to get to your destination pic.twitter.com/mMDUJsPhal

Murphy instructed people to take down all temporary structures, including tents and umbrellas. Outdoor furniture and other loose objects should be secured or placed indoors.

Southeastern Pennsylvania and South Jersey are expected to receive 2-4 inches of rain, according to the National Weather Service. Heavy rain is expected to cause major inland flooding and storm surges at the Jersey Shore and along the Delaware River.

Wind gusts could reach as high as 73 mph.

Isaias was upgraded to a Category 1 hurricane before hitting North Carolina on Monday night, sustaining winds of 70 mph before arrival. It was downgraded to a tropical storm Tuesday morning.

Two people were killed and extensive damage occurred in the Caribbean over the weekend as Isaias swept through the Dominican Republic, Puerto Rico and the Bahamas. In Florida, beaches and parks were closed as officials adapted shelter policies to account for COVID-19.