Study: Fans' sadness from defeat is greater than happiness from victory

And 27-10. There was Ronde Barber. The Fog Bowl. The air guitar before a beat down from Dallas. Three measly points and three interceptions against the Panthers. The list, as all Philadelphia Eagles fans know, goes on.

Like many of you, I'm of the mindset that all those years of heartbreak and disappointment were ultimately worth it; in fact, if it wasn't for so many let downs, I don't know if I would have enjoyed Feb 4, 2018, as much as I did.

With that caveat in mind, I present to you a recent study from British economists Peter Dolton and George MacKerron. The duo's research set out to answer a tough question: Is the thrill of victory worth the devastation after defeat?

They used reports from millions of people, mostly in the United Kingdom who reported their levels of happiness before and after a match. They cross-referenced that information with the results from English soccer matches during the 2011-2013 seasons, making educated assumptions about which teams people likely rooted for based on where they lived and other factors.

Here are the results, as summarized by Bloomberg columnist Cass Sunstein:

For those who actually attended matches, both wins and losses had a significantly larger impact on happiness (not surprisingly). But the difference between the two persisted: If you took the trouble to go to the stadium, your suffering after a loss would be much greater than your pleasure after a win.

The researchers put together a chart to help visualize their findings. Below, the red line indicates fans' levels of sadness after a loss, while the green line indicates levels of happiness after a win (the orange line is after a tie, which happens far more often in English football than American football.) 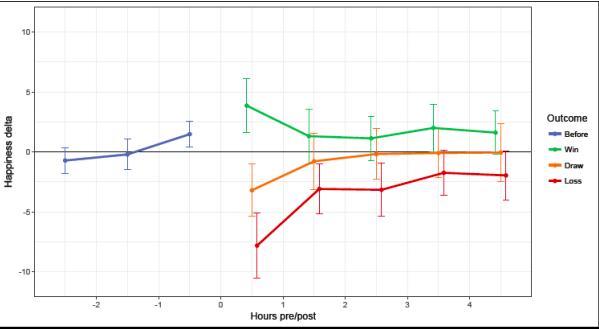 National Institute of Economic and Social Research/University of Sussex

This chart maps out research from British economists Peter Dolton and George MacKerron. It shows the happiness level of English soccer fans after wins, losses and ties.

Dolton and MacKerron found that the heartbreak was much worse after a loss in which your team was expected to win. They acknowledged that they didn't take some things into account, like the social aspect of being a fan.

Again, I think a lot of Eagles fans might contend that the euphoria after winning Super Bowl LII was well worth decades of watching games without a title.

Although there might be some who wish they had spent those Sundays that ended poorly doing something else.

So, I'll pose the question to you:

A new study suggests that for sports fans, the sadness from defeat is greater than the happiness from victory.#Eagles fans: Were years of heartbreak worth the Super Bowl LII triumph?